Oppo announced the next installment of its launcher called ColorOS 6.0 during a special event in Shenzhen when the company was celebrating the fifth anniversary of ColorOS. It is the latest version of OPPO’s Android-based operating system which brings a redesigned user interface and new features. Recently, OPPO has released its very first beta version which is available for the OPPO R15 Dream Mirror Edition.

The announcement about this update was made on ColorOS Weibo Account. However, there are still no words about the changelog yet. If you are among the owners of the OPPO R15 Dream Mirror Edition, then you can install the public beta by going to Settings > Software update. Furthermore, the update is being pushed out in batches so you may have to check multiple times. The surprising part of the news is that OPPO R15 Dream Mirror Edition has not received the ColorOS 5.2 and a more recent update albeit beta is already available for it. 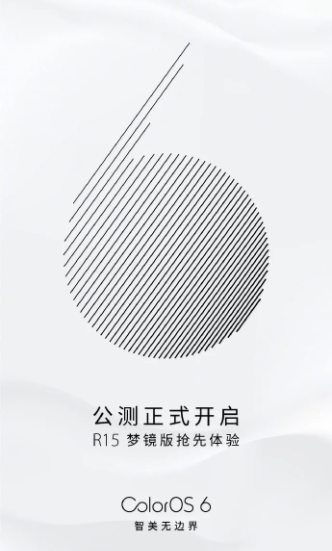 We all know that OPPO R15 Dream Mirror Edition was launched back in April of this year. It comes with a 6.28-inch FHD+ display. Moreover, it has an aspect ratio of 19:9 with a Corning Gorilla Glass 5 on top. Furthermore, the handset features a Snapdragon 660 processor, 6GB RAM and 128GB of storage. The phone features a dual camera set up. The Dual 16MP + 20MP cameras sit on the rear of the smartphone. On the other hand, a 20MP sensor is housed inside the notch of the display. There is also a rear-mounted fingerprint scanner and a 3430mAh battery with support for VOOC Flash Charge. We have not received the changelog related to this update yet. If you people can list the features that are bundled with this update, do share with us in the comment section.