We all know that OPPO is working on its upcoming flagship phone, OPPO Reno.  The handset will go official on April 10. We had been getting a lot of rumors and leaks about this upcoming handset for many days. In addition to that, the handset also surfaced on TENAA revealing the key specs and images of the phone. OPPO Reno Leaked with Periscope Camera in Marketing Banners. 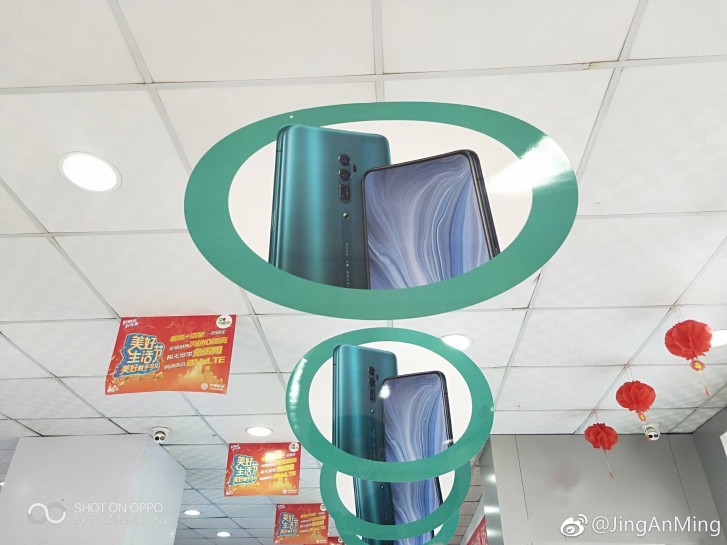 The latest leak shows the OPPO Reno with a periscope camera in marketing billboards. The billboards are hung on a ceiling of what looks to be a retail store. The image clearly shows two camera lenses and a periscope module. Rumor revealed that the OPPO Reno will have a 48MP f/1.8 main snapper, a 20MP f/2.6 ultra-wide and a third 5x optical and 10x hybrid zoom camera.

The upcoming flagship phone, OPPO Reno got listed on TENAA. The smartphone with model number PCAM00 and PCAT00 surfaced on TENAA hinting at two different variants. According to the TENAA listings, the phone will come with Snapdragon 710 variant and a Snapdragon 855-powered model as well. The Snapdragon 710 variant of Reno will sport a dual camera set up at the back. It will be consisting of 48MP and 5MP camera units. However, there will be a 16MP camera peeking from the top for selfies and video calls.

On the other hand, the Snapdragon 855-powered variant of the Reno is expected to come with premium specs. Moreover, it will also come with liquid cooling technology for better performance. The upcoming handset will have a massive battery with 50W fast charging to keep the lights on. It will sport a 3,680 mAh battery under the hood.