Ladies and Gentlemen! Yesterday, we came across the teaser of upcoming Oppo Reno3 Pro 5G on Twitter posted by the company’s VP Brian Shen. He shared the image of the phone that shows the right side of the phone. But, after few hours we got to see the full frontal render of the phone on the internet. 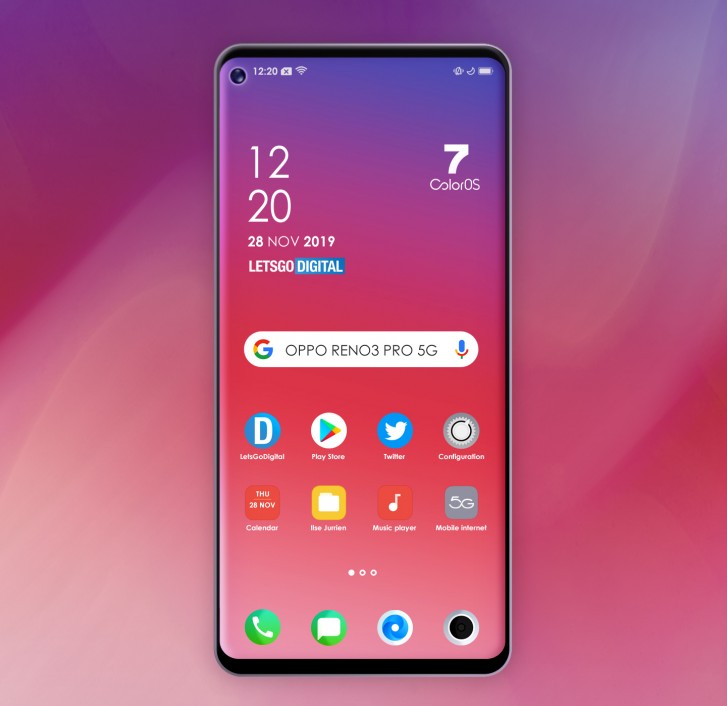 In the image of the smartphone given above, we can see that there is a punch-hole on the left for the single selfie cam. The punch-hole looks smaller than the most, or there can also be possibility that handset might be bigger in the size.

It is to be noted that the Reno3 Pro 5G will be the first dual-mode 5G smartphone of the Oppo, which means it supports the both standalone and non-standalone 5G networks.

The Reno3 Pro 5G comes with a curved touchscreen as we can see in the image. According to the previous leaks the phone will have is a 6.5″ FHD+ AMOLED with 90Hz refresh rate. The company is going to launch the phone officially next month.

The powerhouse of the Reno3 Pro 5G is fueled by a 4,500 mAh battery, with 30W fast charging. However, the phone is not supporting wireless charging. It has also been rumored by some sources that smartphone will be packed by the Snapdragon 735 chipset for smooth performance. The phone has 8GB of RAM and 256GB of storage. The front-shooter of the phone will have a 32 MP lens, and a quad rear setup, with a main 60 MP shooter. It has also been reported that the smartphone will be running on the newly unveiled ColorOS 7.

Recommended Reading: Oppo to Launch its own mobile chip