OPPO is having an event to introduce the Reno6 series in China tomorrow. The series will include Reno6, Reno6 Pro and Reno6 Pro+. There is another smartphone dubbed OPPO Reno6 Z 5G. The phone has just certified by Malaysia’s SIRIM and has now bagged certification by Thailand’s NBTC. 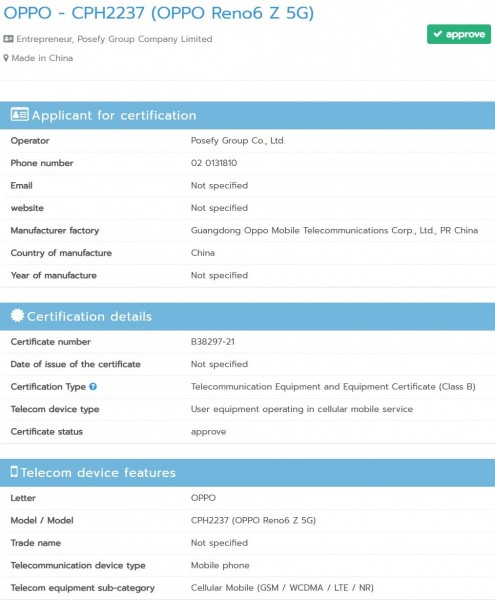 The phone has appeared with a model number CPH2237. The listing on the Thai certifying authority’s website doesn’t include any specs of the Reno6 Z 5G. But we can make a guess that it could be a rebranded OPPO smartphones since its predecessor (Reno5 Z) was a rebranded F19 Pro+ 5G with slower charging and NFC chip onboard. We will surely get more information about it at tomorrow’s event.

The recent TENAA listing has revealed that the vanilla version will come with a 6.43” display and a 4,200 mAh battery with 65W fast charging. Then there are the OPPO Reno6 Pro and Reno6 Pro+. The Pro model, CPH2247, showed up on SIRIM as well and more recently at the NBTC, its full name is listed as the “Oppo Reno6 Pro 5G”.