Our nation is waiting for the final results of Pakistan election 2018, which are still to be officially unveiled . However official results should have been be announced by now. The Election Commission of Pakistan said that the RTS has suffered from technical glitch because of data pressure. After a long time, IT team has resolved the problem. Preliminary results indicated that Pakistan Tehreek-i-Insaf (PTI) has obtained a clear edge over other parties.

Although PTI workers and supporters started celebrations before the final results. PTI fans have shared tweets on twitter and are so excited while some people are not so happy over the victory of PTI. The PTI is clearly steering ahead.

Below are the some tweets we found on the social media:

Is this tweet original ? And if yes than please forward it to Maryam Aurangzeb, Mushahid Husain Syed, @CMShehbaz & others because they have forgotten their own rules of game.#ElectionPakistan2018Results#ElectionResults#MassiveRigging#JeetayGaKaptaan pic.twitter.com/1RnwidGzgg

My Prime Minister. Our Prime Minister. ???? #NayaPakistan ✅ @ImranKhanPTI we pray that you only work for the betterment of Pakistan & do everything that you promised. pic.twitter.com/atmcG4m8sZ 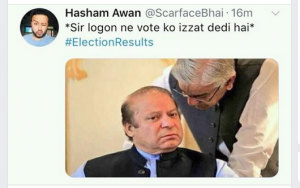 These type of so many tweets and posts are floated on social media. CEC Muhammad Raza Khan also congratulated the people of Pakistan for participating in a “democratic polling process”, and expressed gratitude for the polling staff across the country as well as the security personnel deployed on Wednesday. 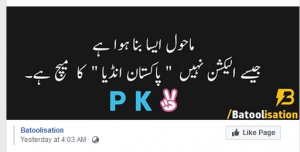 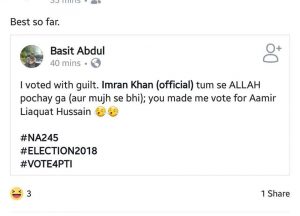 As the PTI is very famous among youngsters and they are more active on social media so we can see that how excited they are to see Imran Khan as a Next Prime Minister of Pakistan.