The Government of Pakistan made a total of 1,002 requests for 1,431 account requests in the second quarter of 2016. Moreover, Facebook produced 67 percent of data in these cases. The social networking website also provided information on the number of account preservation requests by Pakistan – 442 cases. 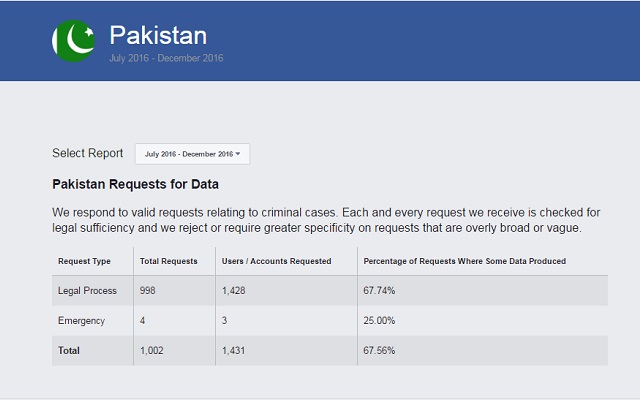 The number of content restrictions for violating local law went down by 28% globally compared to the first half of 2016, from 9,663 to 6,944. For the very first time, Facebook has introduced  internet disruptions that impacted access to Facebook products and services during the half. Currently, there is only one internet disruption blocked in the second half of 2016.

We apply a rigorous approach to every government request we receive to protect the information of the people who use our services. So, we scrutinize each request for legal sufficiency, no matter which country is making the request, and challenge those that are deficient or overly broad. We do not provide governments with “back doors” or direct access to people’s information.