Pakistan has come up with a great initiative to boost the country’s digital position during the last few years. There are multiple initiatives that were introduced by private organizations along with government help. The boom of e-commerce, e-education, e-health, the launch of new apps to reach the general public, and the digitalization of government offices is some of the examples through which Pakistan has witnessed growth in the digital economy. However, it seems it still has a long way to go since the overall position of Pakistan is not very well as compared to the world irrespective of its improved initiatives and growth. Surfshark, a cyber security company conducts the Digital Quality of Life Index every year to evaluate countries on digital revolution based on five essential wellbeing pillars that are internet affordability, internet quality, electronic infrastructure, electronic security, and electronic government.

Like every year, the Digital Quality of Life (DQL) Index 2021 was carried on which ranked Pakistan among the worst countries in the world for digital adoption. Pakistan has slipped 14 places since last year and is now standing at the 97th spot among 110 countries.

It’s sad to see Pakistan’s deteriorating position in the DQL 2021 index compared to 2020, as it dropped from 83rd spot to 97th in just one year, instead of improving its position.

According to the Survey, Pakistan has performed better than Bangladesh however it still lags behind India. DQL has ranked Pakistan at 66th for internet affordability and 74th for internet quality. As far as infrastructure is concerned, Pakistan acquired 106th spot, whereas 98th in the e-security domain and 85th in the e-government category. 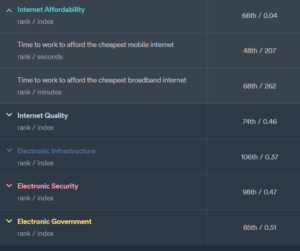 Furthermore,  that mobile and broadband internet speed in Pakistan has shown slightly good results and ranks 41st and 43rd, but it is still the slowed mong other countries.

These stats clearly show that there is a big way to go. While the government is working at a fast pace and the PM digital Pakistan initiative also has the same aim, these efforts should be accelerated to improve Pakistan’s position a sit will not only be good for Pakistan’s economy but will also make the lives of people easier.