Panasonic Corporation has announced that as of the end of September 2020, it became the first Japanese company to ship a cumulative total of 200 billion dry batteries worldwide after achieving the 100 billion milestones in 2001 since the start of in-house production of dry cells in 1931.

Panasonic started manufacturing dry batteries in 1931 to promote the widespread use of its square-type handheld battery-powered lamp, the first product under the National brand. In 1939, the company, a pioneer of overseas factory expansion, established its first production site outside of Japan in Shanghai. Since then, Panasonic has opened factories in several countries including Thailand, Peru, Costa Rica, Brazil, Belgium, India, Indonesia, and Poland, producing a cumulative total of approximately 150 billion dry batteries overseas. Along the way, the company has contributed to improving the quality of life of people and promoting industries in these countries. 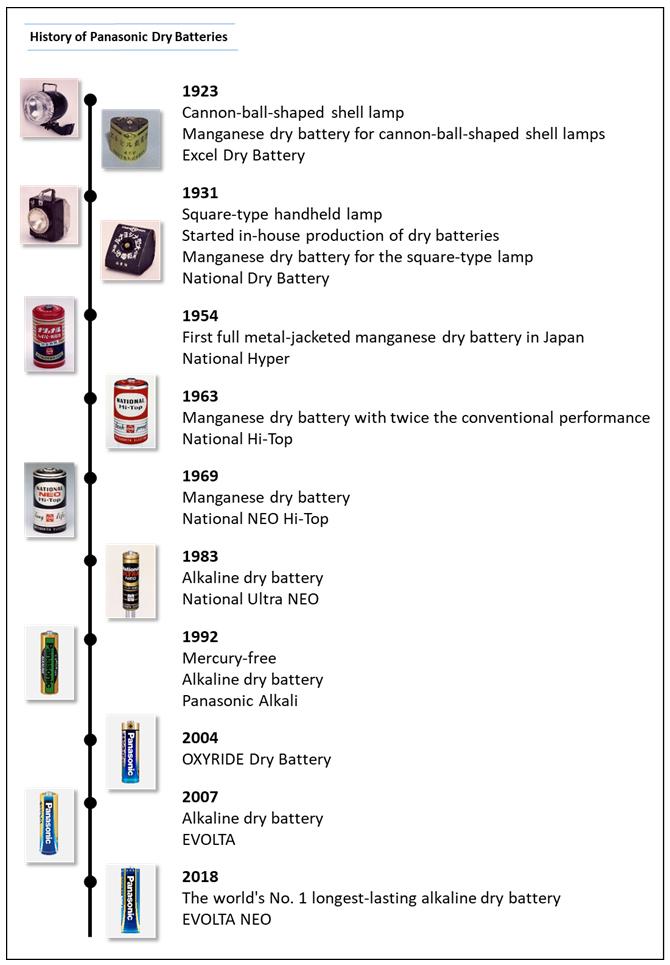 Commenting on the achievement, Koji Hatanaka – General Manager, Panasonic Marketing Middle East and Africa (PMMAF) said, “Panasonic’s dry battery brands like EVOLTA and EVOLTA NEO are among the best alkaline batteries and have set the Guinness World Record for longest-lasting AA alkaline batteries for 13 consecutive years. Our dry battery products make energy portability possible in remote areas of the world, assist in natural disasters and offer trusted performance for our customers, and reaching 200 billion shipments is a proof of trust our partners and customers put in us. Panasonic will continue to contribute to achieving a better life by globally supplying high-quality and safe dry batteries.”

The progress of dry batteries is closely related to the devices that use them. In 1954, Panasonic released Hyper, the first full metal-jacketed dry battery in Japan, in accordance with international standards. The Hyper batteries were mainly used for flashlights and lamps. In 1963, the company developed Hi-Top, which had twice the capacity of Hyper, and in 1969, Neo Hi-Top with three times the capacity of Hyper. These batteries were mainly used for tape recorders and radio cassette recorders. In 1995, Panasonic developed high-current alkaline dry batteries with significantly improved heavy load discharge performance, improving its battery performance to support the characteristics of increasingly common digital devices. The progress of devices necessitated large-current dry batteries, accelerating the shift from manganese to alkaline dry batteries.

Panasonic’s dry batteries have a superb track record in quality and performance. In 2008, Panasonic released EVOLTA alkaline dry batteries, which achieved the expiry date of 10 years, an industry first in Japan. EVOLTA NEO alkaline dry batteries were released in 2017, which when compared with the conventional EVOLTA, feature a superior long-lasting performance after long-term storage, approximately 30% less gas build-up after over-discharge, and approximately 10% longer life, thereby realizing dry batteries that are safer and last even longer. Since its release in 2008, EVOLTA, and EVOLTA NEO after 2017, have been recognised as the longest-lasting AA alkaline batteries by the Guinness World Records, with the latest recognition on August 17 this year for 2020, the 13th consecutive year. To promote the longest-lasting performance of the EVOLTA series recognised by the Guinness World Records, Panasonic held an “EVOLTA challenge” event every year from 2008 to 2019, taking up a variety of challenges using EVOLTA and EVOLTA NEO. Panasonic has set four Guinness World Records through these challenges.

Batteries can also be helpful during emergencies. As part of preparations against increasingly frequent natural disasters, EVOLTA NEO can be safely used even after long-term storage. With the concept of “Everyday Convenience × Being Ready for the Unexpected,” Panasonic also offers dry-battery-powered devices including lighting products and mobile chargers that are available for everyday use and can also be used in the response to a natural disaster.

In the future, Panasonic will enhance sales mainly in the Asia and Latin America markets, which are expected to have high demand growth for dry batteries. Panasonic enjoys high brand recognition in these regions, where high-performance alkaline dry batteries are expected to replace manganese batteries. Taking advantage of such market shift, Panasonic will proactively supply high-performance, high-quality alkaline dry batteries centred on the EVOLTA series, which the company has developed over the years, to achieve business growth. In sales promotion activities in overseas markets, mainly in Asia and Latin America, the company’s advertisement will feature Panasonic LEO, an original mascot for overseas symbolizing the “long-lasting,” “contribution,” and “familiarity” attributes of its dry batteries, aiming to establish the brand image of Panasonic as a provider of high-quality, safe and secure batteries.

To realise a sustainable society, all Panasonic production factories have been working on the reduction of CO2 emissions. Three factories in Costa Rica, Belgium, and Brazil have already achieved zero CO2 emission. A factory in Costa Rica was certified as the first “carbon neutral factory” in the country in 2019.

Based on its technologies developed over the years, Panasonic will continue to contribute to achieving a better life by globally supplying high-quality and safe dry batteries.