Motorola was one of the few companies to launch a foldable smartphone named Moto Razr and its 5G variant. However now many other companies have joined the race, we have not heard anything from the company for the last 1.5 years.  Now after so much time, Motorolla is granted a patent by World Intellectual Property Organisation-WIPO for a new upcoming foldable phone. The patent of the Motorola flip phone has posed some concerns among the other device manufacturers.

The new phone seems to be tall and narrow just like its predecessor. However, the difference lies with the screen that folds outside and the foldable display wraps around it, which one folded creates a dual-screen device. 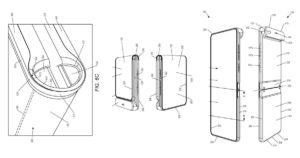 The above patent shows a small island of camera setup on the top of the phone. It means that the bottom part of the screen will be shorter. It means we can easily understand that the new patented device is a mixture of Moto Razr and Royole Flexpai.

What totally is new in this device is a hinge that is an entirely new solution that will minimize crease and allow the phone to fold without any gaps. The moving parts that are actually included in the device will allow it to bend freely.

While it is just a patent and the end result looks amazing, we are not sure whether it will make it to the market or not since most patents do not convert into devices at the end of the day.

Other than this, the device looks quite amazing since it uses strong protective glass for foldable panels. It means if the device lands in the market, it is surely going to pose a big competition among competitors.