TCL is working on Palm-branded smartphone, which has appeared in several listings. The phone might be a budget device. Some listing has revealed the “Pepito” name, but we are not sure if this is the final name.

According to previous reports, TCL plans to release the device “Pepito” in the second half of 2018.

Pepito On its Way

Currently, there are  few details available on FCC listing for the Pepito phone which has model number PVG100. The label on the back of the device reveals that the phone will be designed by Palm in San Francisco. 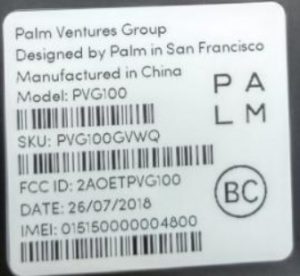