Earlier this month, Federal Board of Revenue (FBR) had increased taxes on mobile phones. This new taxation system on sale has created a lot of unrest in telecom sector. Traders and telecom sector have flatly rejected these taxes.

This decision has become the biggest nightmare of all retailers. We all know that this decision will affect the lives of 1000s of retailers, the future of retailers have been placed in darkness.

The government hasn’t shown any leverage on this issue and the traders started protests in different mobile markets. Members of Peshawar Mobile Trade Association Falak Sair Plaza showed their concern about the increased sale taxes on mobile phones. Peshawar mobile market is expanded to Noshehra, Charsadda, Mardan, Swabi, Kohat, Swat, Deer and many small markets all around KPK.

[blockquote cite=”Hidayat Ullah Sahibzada; President of Peshawar Mobile Trade Association”] The measures taken by the government for the cellular sector should be based and guided by the principle that the normal lifestyle of the general masses should be least affected.
[/blockquote] [blockquote cite=”Abdul Nabi Bangash, Vice President of Peshawar Mobile Trade Association, Falak Sair Plaza”] There will be no tolerance on this issue, this should be undone as soon as possible or it would jack up the graph of unemployment in Pakistan and it will affect our economy directly and indirectly.
[/blockquote] [blockquote cite=”Adnan Khalil (Media Secretary) “] Actually the Federal Board of Revenue (FBR) decision would benefit smugglers, cell-phones carrying over Rs50,000 price tag used to arrive through illegal channels. The decision is likely to make used cell phones dearer due to increase in the price of new phones
[/blockquote] 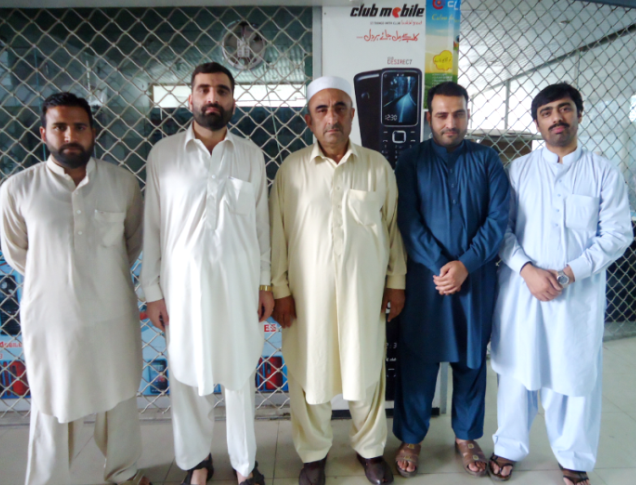 Haji Mujeeb-ur-Rehman (General Secretary) said that Pakistan is a big market for all types of phones, and the country spends millions of dollars per annum on import of cellular phones, particularly low end phones. He stressed on the increased sales taxes on mobile phone, he said that it has already started damaging the business and the markets have lost their business by 70%.