PITB Issues Over 7000 Judicial e-Stamps Just in a Month. After a month of its launch, more than 7000 judicial e-stamps worth Rs. 33 million have been issued. It is an initiative launched by the Government of Punjab in collaboration with Punjab Information Technology Board (PITB).

The new system permits people to pay their court fee via e-Stamping. The non-judicial e-stamping system is already operational in all 36 districts of Punjab since October 2016.

PITB Issues Over 7000 Judicial e-Stamps Just in a Month 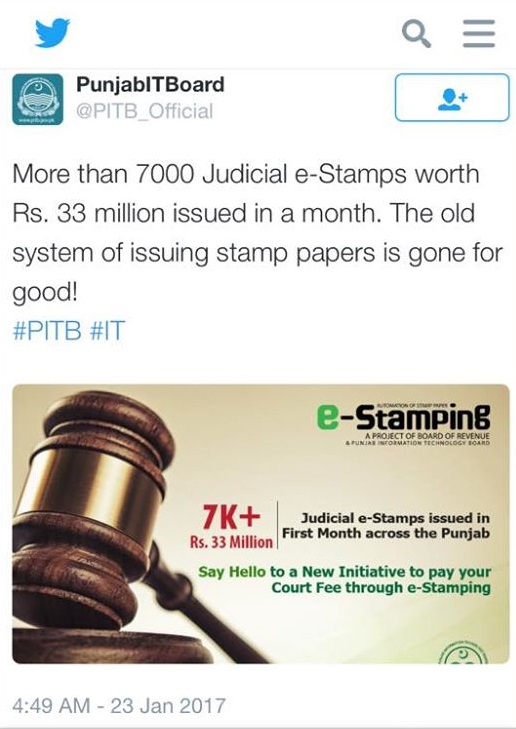 Old System of Issuing Stamp Papers is Gone for Good

With the new system people won’t have to wait long to get stamp papers. Now they will get them within 15 minutes instead of three days. As they will be able to complete the process online they won’t have to visit offices and banks all the time.

The online facility allows users to fill the challan form online and then submit it to the nearest Bank of Punjab branch to get an e-Stamp paper.

This initiative has replaced the 70-year old system of issuing stamps. The digital issuance of judicial e-Stamps can also help to reduce frauds as anyone can verify the value of an e-Stamp paper. It can be verified by sending the 16-digit e-Stamp number mentioned on the paper via SMS to 8100.