The National Assembly Standing Committee on Information Technology approved the Prevention of Electronics Crime Bill, 2015 on Thursday, despite huge criticism against it.

Almost six to seven PML-N members of the committee were present on Thursday and all of them were in favor of passing this bill. MQM MNA Ali Raza Abidi was the only member in NA who opposed few aspects of the bill.

Overall 14 out of 20 PML-N MNAs approved the bill, while the rest of 5 or 6 candidates were absent on that day.

Miss Anusha Rehman, State Minister for Information Technology, replied to the critics of cyber crime bill and said that the government didn’t actually want the IT businesses to suffer in the country. She further added that:

[pull_quote_center]“The bill protects the interests of foreign investors and offers local businesses a bail out option. It does not hold them responsible for objectionable content placed on the Internet by an individual. It does not criminalise an individual until intent is proven and the bill permits law enforcement agencies to confiscate data and equipment as evidence.”[/pull_quote_center]

Also the PML-N MNA Mr. Farhana Qamar said in favor of bill that those who committed cyber crimes should be punished properly.

[pull_quote_center]“We can also not move forward unless judges are trained in the subject to decide cases of cyber crime. Offences relating to information systems are in line with local laws. The law also binds us to cooperate with other countries to fight terrorism.”[/pull_quote_center]

According to the group of critics, this law is actually against the freedom of expression and civil liberties. It only strangles social media rights whereas no limits for Television and print media has been mentioned.

Mr. Wahajus Siraj was found against the Section 18 of bill, according to which “whoever intentionally publically exhibits or displays or transmits any false intelligence, likely to harm or intimidate reputation or privacy of a person shall be imprisoned for three years and fined Rs500, 000.”

This Section also states that:

The news of the approval of Prevention of Electronics Crime Bill, 2015, created a hype among Joint Action Committee, including of internet service providers and other experts from the IT industry. All of them responded that constitutional rights to speech, access, writing and visualization and most importantly freedom of expression, were under threat of becoming criminal actions under the new bill.

People on social media are also found against this bill as #WeRejectCyberBill trend was formed soon after the news prevailed. Many famous personalities also tweeted against the Bill. Former NADRA Chairman tweeted:

The main highlights of Prevention of Electronics Crime Bill, 2015 that faced sever criticism include: 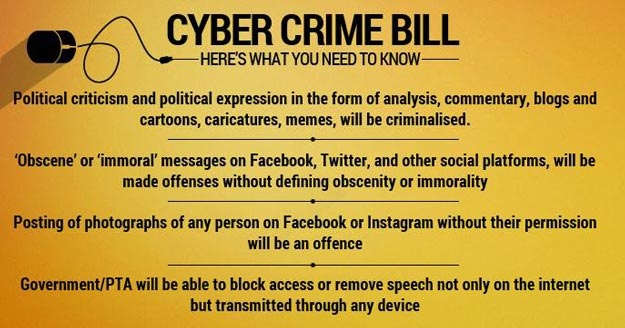