PTA in this regard has issued policy directive for the auction of three blocks of 10 MHz each in 2100 MHz and one block of 10 MHz in 1800 MHz band on its official website.

PTA will carry out the auction process following the powers conferred to it by the sub-section (2) of section 8 of Pakistan Telecommunication (Re-organization) Act 1996. The entire auction process will be concluded as soon as possible said by PTA.

The advertisement of EOI was published in the newspapers: 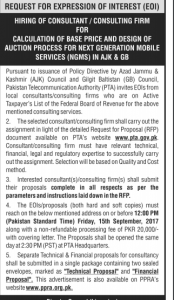 According to the policy directive, all existing telecom companies in Pakistan, GB and AJ&K will be eligible to participate in the spectrum auction. A new license for the provision of NGMS will be issued to the successful bidders. The tenure of license will be 15 years of time period. The auction winners may deploy renewable energy sources as power back up in the region.