Due to the fault in SEA-ME-WE-4 cable, many PTCL users were facing slow browsing at peak hours. For such inconvenience, Pakistan Telecommunication Company Limited (PTCL) apologized from all its customers and said that the internet services are now back. PTCL Offers Extra Speed as Apology for its Poor Internet Connectivity Due to Fault in SEA-ME-WE 4 Cable.

The International submarine cable SEA-ME-WE 4 had experienced a fault due to which PTCL users were very upset. Then restoration work had been initiated by the international consortium that managed the submarine cable systems. However, due to the fault in this undersea cable, the internet users experienced slow browsing during this period. For that reason, PTCL apologized its customers on its Facebook Page. 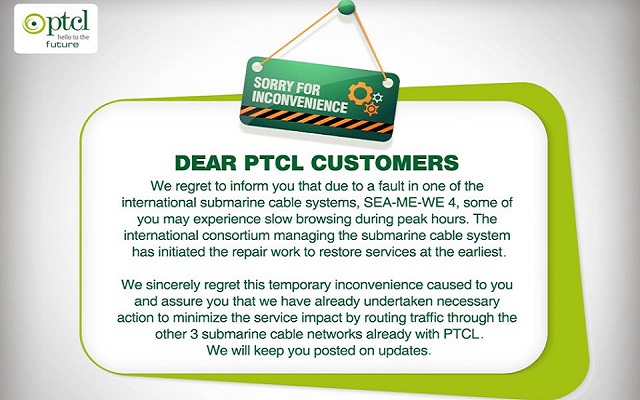 But now internet services are back to normal and users can get fast internet as well. Now PTCL announced that it has arranged additional bandwidth for faster speed as apology to its customers.