PTI MNA Ayesha Gulalai decided to part ways with party, alleging that there was no respect for workers in party. She also revealed that she received inappropriate messages on her phones. PTCL Reply on Twitter Regarding Ayesha Gulalai Controversy is Epic.

When asked Ayesha Gulalai told that for the first time she received such messages in October 2013. To this confession, many media channels and people on social media made fun of her ans asked her that where was she for the four years. And why she revealed about them now.

PTCL Reply on Twitter Regarding Ayesha Gulalai Controversy is Epic

As Pakistanis are very active on social media platforms, be it Panama case or Ayesha Gualai allegations. A Pakistani will always find various interesting ways to do things and more specially on social media these days. PTCL on Twitter is great. PTCL is not only actively resolving complaints but are also doing stuff like this. Few days back Munir Nizami’s Sarcastic Facebook Complaint to PTCL Went Viral & Gets the Job Done.

While people were trolling Ayesha Gulalai on social media platforms, a man having id “That Asad Tough” made fun of her by sarcastic tweet against PTCL.

Just like other active debaters on politics, Asad cracked a joke. To which surprisingly PTCL replied from there official page. 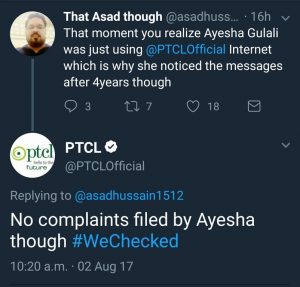 PTCL taking part in such meme and funny politics is epic. It seems like they are used to people making such complaints against them on social media platforms hence actively replying on them.