Pakistan Tehreek-e-Insaaf has launched its mobile app for iOS while the Android version is said to be in the making as of now.

The App was launched by the PTI Mobile App Team (Jibran Ilyas, Haris Siddique, Aly Boghani) in collaboration with their Web Management and the Social Media Team. The about section of the App states that the project was initiated by Youth of PTI (USA) and is built with the supports of volunteers.

PTI iOS App is retina optimized and supports the latest iPhone 5 screen size while its total size is around 18.8 MB. Lets have a look what this App has to offer: 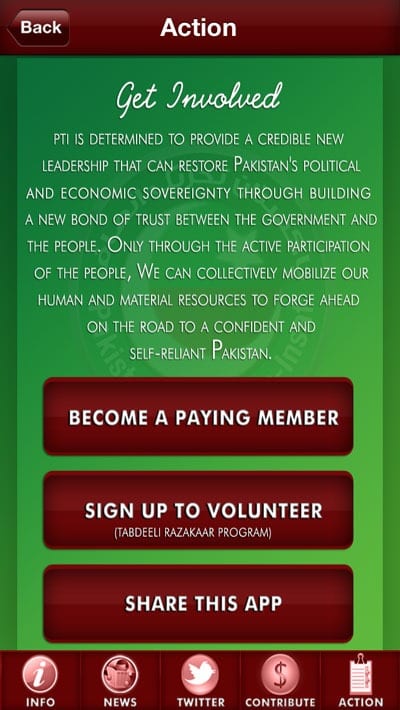 Tap on a button on the home screen and compose SMS message window pops up where voters can send their CNIC number and get their voter verification details.

A button on the Landing screen takes you to “TuneIn” web page within the App where the audio stream can be listened. (TuneIn is a famous broadcasting hosting service). At the moment the Radio features requires you to download an additional App “TuneIn”, the lack of in-App radio stream support seems disappointing. However this can be enhanced in upcoming versions.

Although essentially a webpage, yet the video viewing experience is leaps ahead of the Audio Stream (Radio) capabilities. The webpage opens within the App, which has a responsive design (optimized for mobile) and the overall interface seems like a YouTube clone — having features like Search, Like/Dislike, Share etc. (Content is populated from http://insafpk.tv/)

Also available on the landing screen, a shortcut for the user to donate from their Credit Card to PTI. This is a powerful feature however executed poorly. The action forces the user outside the app, opening up a window in mobile safari browser.

The webpage presented is not even mobile optimized that leads to a lot of pinching in and out to accomplish what should have a been made an experience that is delightful and simple as possible.

I found the segmented controllers used at the top a painful experience to organize content from various sources. They are tiny, hard to read and tap on. Wastage of negative space should have been put to better use. Although efforts to maintain consistency throughout the App should be applauded. Worth mentioning here is the Twitter API integration which makes sharing a tweet is super easy.

‘Become a Paying Member’ and ‘Sign-up to Volunteer’ are in-app forms in which the user can fill their information. (This is what contribute section should have been like: an In-App form). Although I don’t approve the overall designs of these forms, tiny font and wastage of precious mobile screen. But they serve the purpose and get the job done.

This section of the App displays information related to the political party. There are 6 large buttons on this info page (Ideology, Policies, Constitution, Leadership Assets, About the App ). Most of these are linked to documents instead of native pages. Seems like the development team were rushed and they included document files instead of copying and formatting the content on native app pages.

There is a wealth of information in these document ranging from constitution to policies on economy, health, energy etc. that will help PTI spread its message influencing potential voters and supports.

In my brief testing the App ran smoothly and no bugs were encountered in an ideal use-case (Internet connectivity on), however in Airplane Mode the twitter section caused the App to crash on my iPhone 5. Overall I didn’t like the green background design with spaghetti of fonts and also the excessive use of maroon throughout the app.

At the expense of readability, political branding shouldn’t have been the dominating factor in design decisions. I’m sure there are other ways for achieving branding goals.

In terms of functionality there are some interesting concepts of how the political party has tried to bring together its digital media in a cohesive experience. Perhaps what is even more interesting to see is how this initial effort transforms over the months and what response comes from other political parties. PTI is the first one in the mobile market but would it be able to dominate this segment, only time time would tell.