With the rising popularity of Uber and Careem , both ride hailing companies were getting famous with many people booking them by using Apps to reach their respective destinations. Punjab Government Bans Uber and Careem in Lahore.

Also Read: Careem Amongst other Shut Down for Illegal Operations in Islamabad

The both car hailing services have been facing certain problems from past. This time Punjab Government’s Provincial Transport Authority has declared the most famous pick and drop services as illegal.

Lahore’s chief traffic officer has been alerted already by Punjab government regarding this. They have asked them not to allow any of these services on roads of Lahore. However its not conformed yet whether this ban is for all the cities of Punjab where these services are operational or just for Lahore.

Punjab government had issued a notification that said that A-One taxi, Uber and Careem donot carry a prerequisite fitness certificate and route permits to bring car on roads. Due to these illegal transport services City Traffic Police has to face major losses and problems. 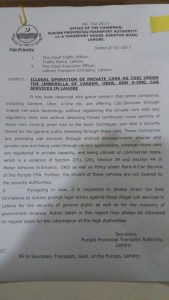 The notification further elaborated that such transportation services should not be used for commercial purposes and they are private cars. These car hailing companies are ruining all local laws and also act as security threat for public using them.

Traffic office is ensured to strict action against these services and ban them to be operational on the roads of Lahore. Now Public would definitely have to face certain issue as these services were providing comfort to travel anywhere.