QMobile BOLT T360 is designed perfectly trendy, handy that enhance your grace. The dimensions are (126 x 64 x 9)mm makes it  handy and easily fits in hands. its has smooth, shiny round edges.  QMobile BOLT T360 is compeletly covered with back leather shape cover.

QMobile BOLT T360M has got large 4.0″ WVGA display. The display suppports 2 point touch and smooth. You can play HD videos and 3D games with display of 480 x 800 pixels resolution. The screen graphics are controlled by Mali 400 MP driver and managed by Android 4.4 KitKat.

QMobile BOLT T360 is packed up with powerful 1.2 GHz Quad core processor to run your favorite apps as quickly as possible. Android 4.4 KitKat provides multitasking environment to processor for fast and efficient performance. Its a 32 bit processor of Spreadtrum S8830 model here with its frequency fluctuate between (786.0 ~ 1200.0) MHz. Processor is quite stable in term of  performance and temperature doesn’t shoot up quickly as shown in below snapshot.

Qobile BOLT T360 is acquired with 1 GB RAM to handle app data inside the smartphone while its running. 1 GB RAM can accommodate your HD videos and games and ensure smooth executions of Apps without hanging the smartphone. in addition Qobile BOLT T360 has 8 GB permanent storage space where you save your important files like videos, images, apps for as long as you need. infact its expandable upto 32 GB with Micro-SD slot.

QMobile BOLT T360 is geared up with smart, elegant front and back camera with normal resolution. It has 5 MP AF camera w/ LED on back and 2 Mp front camera placed at top right corner of  display. Now you can catch you moments with QMobile BOLT T360.

QMobile BOLT T360 offers 5MP AF LED back camera with 2592 x 1944 resolution. Elegant back camera has all essential feature that makes a camera perfect for capturing and making video shoots. You can set the size and quality of image; further it has panorama mode that enables you catch large area in a single shot. Brightness, contrast and white balance of an image can also be set from setting option. there are many more feature which you can check out in camera settings option. here is an image captured with back camera along with detail. 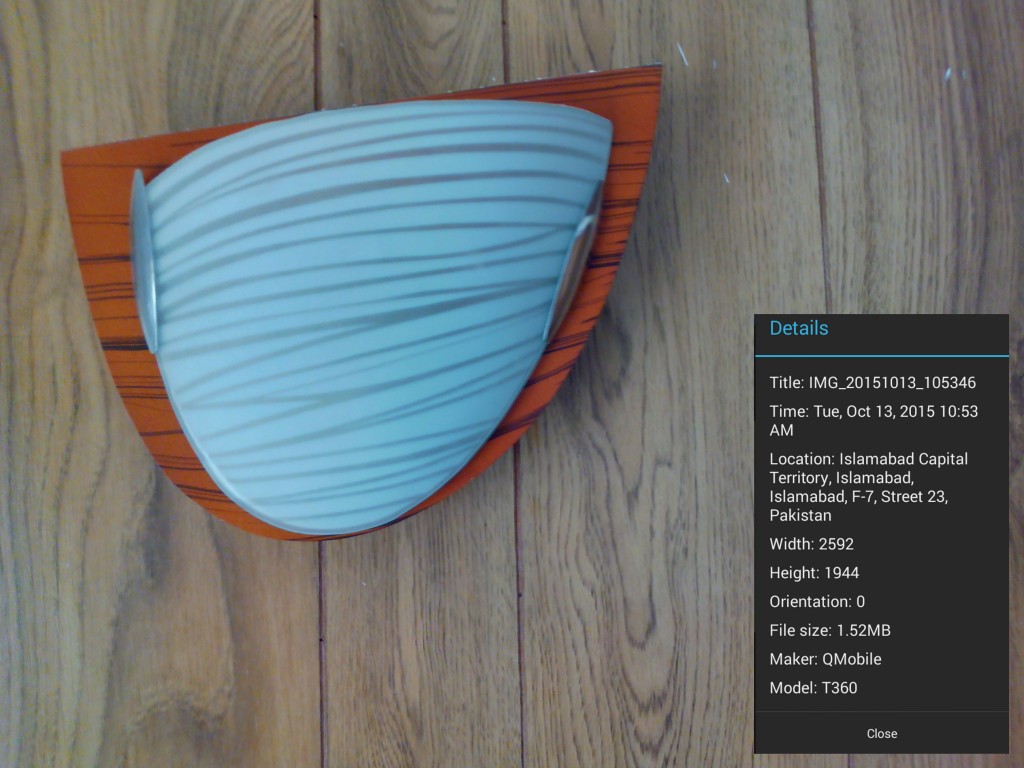 QMobile BOLT T360 has 2MP front camera that is placed on front side phone for taking selfies easily with one click. you just need and QMobile BOLT T360 will catch your moment. although camera has some issue in low light but it has quite good result in light. Below is an image caught with front camera along with details. 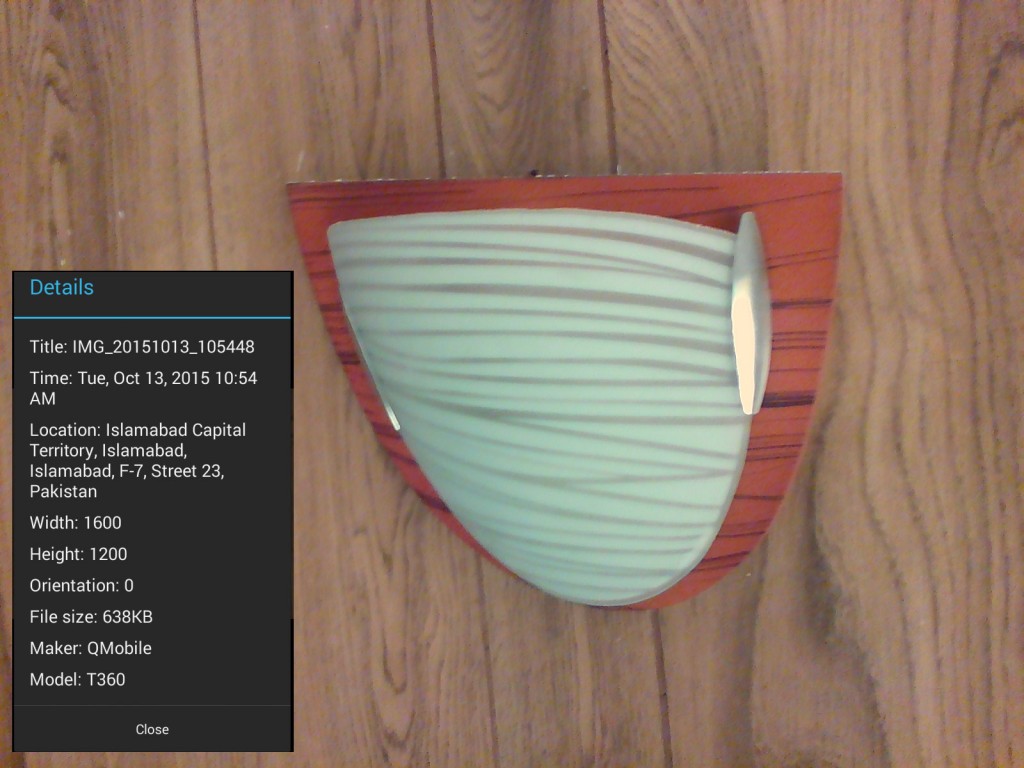 QMobile BOLT T360 is geared up with 1500 mAh battery. its a small battery with small capacity of charge. The battery bar goes down rapidly as you play HD video or use 3G service. Battery is always an issue with QMobile. I think it should have at least 2000 mAh battery to keep the smartphone on for long time. The battery graph is given below.

QMobile BOLT T36 looks amazing, marvelous in hands that enhance the grace of your personality. Its just 9 mm thick that is easily fits in hands. 4.0″ WVGA display has beautiful theme that brighten your eyes with well designed icons. Three navigation buttons are placed out side the display screen. furthermore the back side is furnished with leather shaped plastic cover and smart logo BOLT and QMobile is printed on it. The rear camera is housed at top of center along with LED flash. The powerful loudspeaker is placed at bottom of the back.

QMobile BOLT T360 has designed with smooth round edges and all the four sides are furnished beautifully as you can see in snapshots. Right side smartphone has volume and power buttons while audio jack and charging/data traveling slot are placed on the top side. Microphone is fixed at bottom. These all things are placed accuratly at right place the increase the beauty of QMobile BOLT T360 plus all the button are easily accessible with thumb.

Interface of QMobile BOLT T360 is user friendly and supports 2 point multi touch capacity. The touch experience is awesome just like an expensive smartphone. The Home screen has digital clock and some custom icon along with Google search bar. The display has (480 x 800)pixels resolution and 240 dpi density that makes the screen transparent and Crystal clear. Display graphics are controlled by Mali-400 MP driver. Messaging app has normal QWERTY keyboard, here are some snapshots of interface given below.

Antutu bench mark app checks each part of hardware separately and gives them score based on performance of each part; Thus this score is compared with other devices’ score stored in database. Antutu checks the performance of CPU, RAM, I/O, GPU etc. Read More..

Vellamo checks the overall performance of processor congurently and separtly each of core’s and also checks the browser performance by performing some tests. After testing vellamo gives score according to performance and also make comparison with other devices stored on database. Read More..

In following snapshots we shows results performed tests on QMobile BOLT T360. Over all it is a good score for an entry level smartphone with some basic hardware approach.

while checking the QMobile BOLT T360 with GPU bench mark tool it got 13,617 points and 5,229 points for screen resolution which is score for an entry level smart phone. 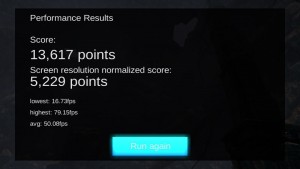 QMobile BOLT T36 is rolled out with powerful 1.2 GHz Quad Core processor along with 1 GB RAM, 8 GB ROM, 4” FWVGA display, 1500 mAh battery, 5 MP back and 2MP front camera and controlled by latest Android version 4.4 KitKat and with many more interesting features. though it has some lacks but for an entry level smartphone it shouldn’t be considered because its price in Pakistan is affordable. A smartphone with price of Rs.6,500 with such great specs is an affordable device at good price.