QMobile is hitting the market in 2017 by introducing its new series devices. Today we will look at the latest device of Power series. The device which we are going to discuss today is “QMobile Evok Power” the latest machine of QMobile which recently came the into market and its price in Pakistan is PKR.12,500/-. Let’s see the QMobile Evok Power Review in detail.

QMobile Evok Power is 5.5 inches’ device with a super touch screen that supports the resolutions of 1280 x 720 pixels. It is 3G supported device Furthermore the system has Quad-core 1.3 GHz processor. ROM is 16GB and RAM is 2GB while powerhouse has 5000 mAh removable battery. Dual SIM options are supportive with dual standby. Camera lenses have 8MP lens for its back and 5MP for the front camera. 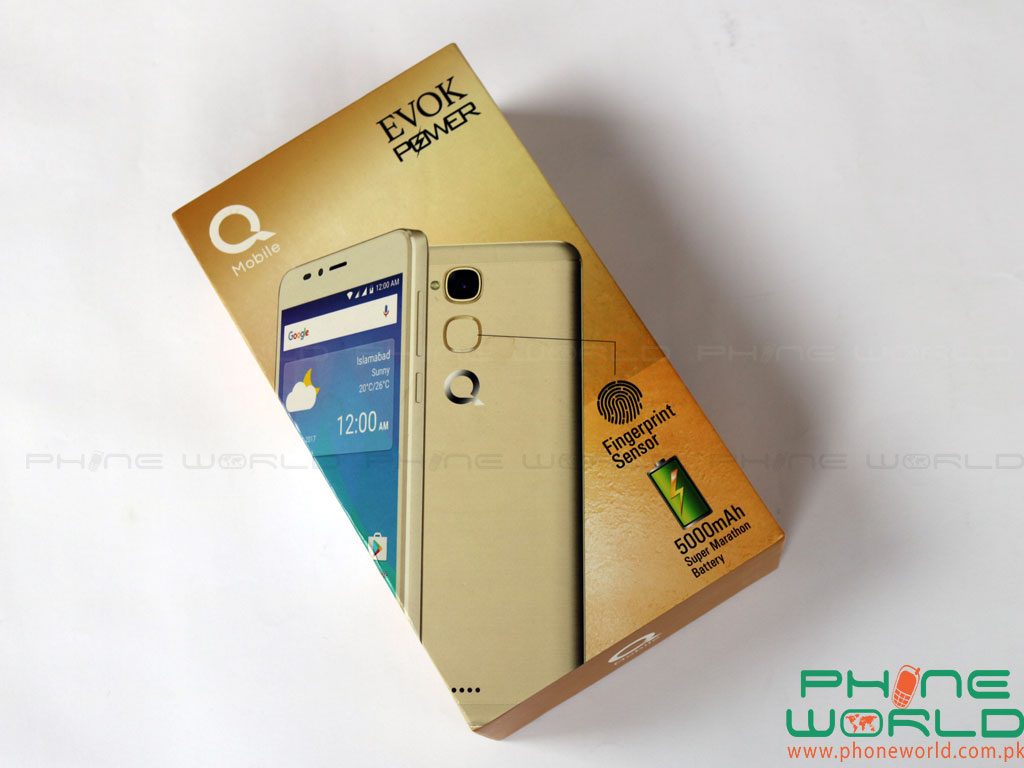 QMobile Evok Power features a 5.5 inches IPS LCD screen and comes with the dimensions of 154.3 x 77.3x 8.6mm with 70% approx. screen to body ratio. Whereas the device weighs around 194 grams- a heavy weight device comparatively.

Talking about the front design of QMobile Evok Power, we have of course an ear piece in the center. To the left side, there’s a front camera and that’s it.The front side is all covered with bezel layers on all four edges.

On the right edge, the device has a volume and power buttons whereas left edge has Nothing. Down side has mic whereas top side has an audio jack of 3.5 mm on it and micro USB connector.

Back Body is totally simple and plain, it has just back camera lens of 8MP on it with LED flash light and fingerprint Scanner. Rest of the body has only QMobile Logo on it otherwise it is totally simple.

As far as the memory is concerned, QMobile Evok Power comes with a 16 GB ROM and a 2 GB RAM. Giving a benefit to the users as they can easily take as many pictures as they want and store a lot of data.

However, excessive storage of data will exhaust the space up. But for that, the expandable memory option is there which can be expanded up to 128 GB. So if you are a person who loves downloading videos or playing games you can take advantage of the expandable memory with the help of the SD card.

QMobile Evok Power is just a 3G supportive device so you can enjoy a faster internet speed. It also has other connectivity options like GPS, Wi-Fi, Bluetooth, and USB.

It also supports some other connectivities such as Wi-Fi, Bluetooth and FM Radio. Wi-Fi supports the standards of b/g/n while Bluetooth version is 4.0.

Evok Power is dual SIM supportive smart phone with dual standby function the while place of the emory card is separate from both SIM places. We can expand its internal memory up to 128GB with the access of memory card.

QMobile Evok Power best point is its big and removable Li-poly big battery of 5000 mAh which is present inside the removable back cover. It has 2A charger with it which will completely charge the device in almost one and half the battery.

The Battery will easily provide us the standby time of 8-9 hours consecutively. Excessive usage of 3G/2G or game play will reduce the battery quickly otherwise it can provide you better time for normal usage.It has media tek chip set which also works for battery saving function.

Back Camera of QMobile Evok Power:

With all other great features, QMobile Evok Power gives us an 8MP back camera. This 8 MP camera also features a LED flash light. The camera is however satisfactory, but it captures great pictures in low light. The camera can flexibly adjust itself to capture photos at night and produces stunning pictures.

It can record videos in 1080 pixels quality. Additionally, the camera comes with some built in modes like HDR and panorama etc.

Talking to the front camera it has a 5 MP result and captures amazing images in low light as well as high light. It automatically detects your face and adjusts itself accordingly. You can take benefit of this amazing camera and talk to your loved ones on Skype or take selfies anytime, anywhere you want.

Moreover, you can further beautify your pictures with the help of the face beauty feature. Let’s check out some pictures taken from front camera of QMobile Evok Power Review.

QMobile Evok Power runs android version 7.0 (Nougat) on it. It has separate application manager in which all the applications are arranged in the form of rows and columns. The Search bar is also present on the top side via which we can directly search any application and access it.

QMobile Evok Power has a 1.3 GHz Quad-core processor and contains a chipset of Media Tek MT6580. This chipset is based on the architecture of ARM Cortex-A53. Furthermore, it has a 2 GB RAM which might make it a little hard to perform multitasking. While doing so, the phone might get stuck.

Antutu comprehensively tests all aspects of a device, including UX, GPU, RAM, CPU, I/O and more. Each item is individually assessed and given a score. Therefore, we ran a test in QMobile Evok Power and got to the results where the device scored 23581 points. On its multi-touch test, the device scored just 2 points.

In our Vellamo Benchmarking, where three tests were carried out, the device scored 1065 points in multicore test, 833 in metal test and 1646 in chrome browser test.

In the age of 4G devices, QMobile has introduced a 3G smart phone with the access of Fingerprint Scanner and big battery of 5000 mAh. The device is suitable for those users who like to have a 3G handset with good battery timings.