QMobile Infinity B has an avg battery of 2000 mAh with the processor of 1.2 GHz quad-core. It runs upgraded version of Android 7.0 (Nougat) moreover camera section has 5MP primary camera lens on the rear with LED flash whereas secondary shooter has smart lens. Memory is 8GB ROM and 1GB RAM. It is a 4G enabled device. 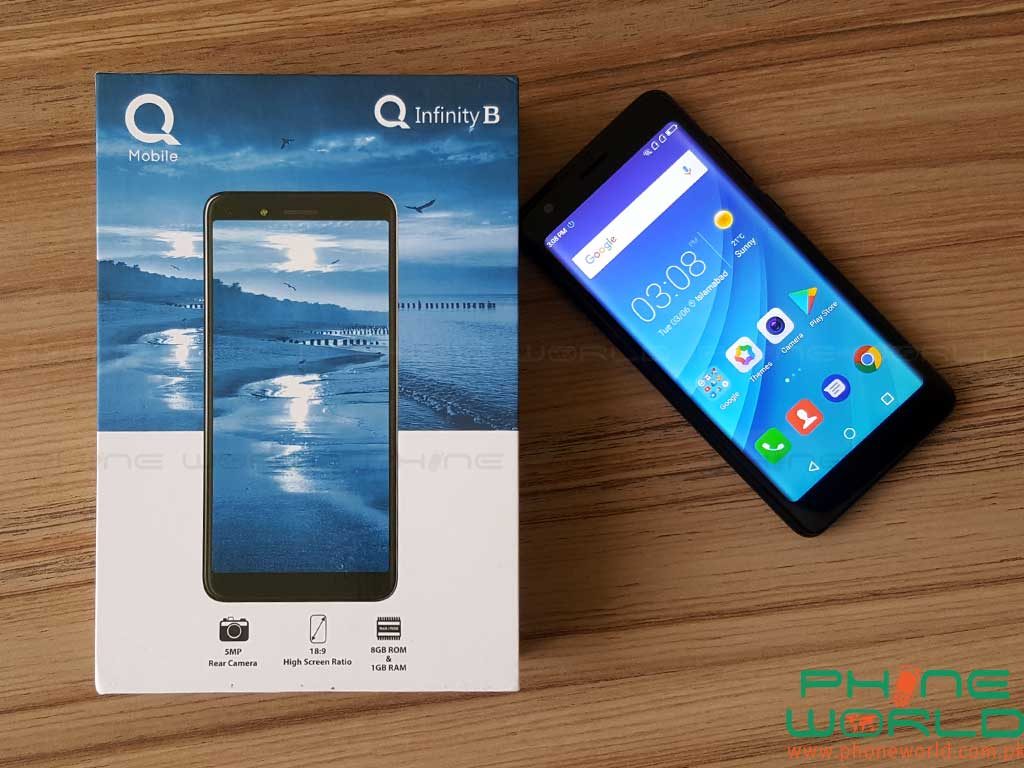 Price and Specifications of QMobile Infinity B:

Display and Design of QMobile Infinity B:

QMobile lnfinity B is a device with supportive resolutions of 480 x 960 pixels and density for the screen is 240 dpi for visibility of icon and texts. It supports a graphic card of Mali-400 MP, which is considered very average. One thing which we have seen in QMobile i6 metal is its multi-touch, that is below average because it has scored only 1-point in it.

The dimensions of QMobile lnfinity B are 133.3 x 62.2 x 8mm and weight is 134 grams. It is carried with a removable battery of 2000 mAh that’s why its weight is little heavy otherwise it’s totally perfect. The infinity B front body has a front camera at its top and function keys at the bottom side while it doesn’t have any bezel layer.

Back of QMobile Infinity B has a shining designed body which has a flashlight and a back camera lens at its top left side. Logo of QMobile is marked in a center of back body.

Camera of QMobile Infinity B:

With all other great features, QMobile Infinity B gives us a 5MP back camera. This 5 MP camera also features a LED flashlight. The camera is however satisfactory, but it captures great pictures in low light. The camera can flexibly adjust itself to capture photos at night and produces stunning pictures.

It can record videos in 720 pixels quality. Additionally, the camera comes with some built-in modes like HDR and panorama etc.

Battery of QMobile Infinity B:

The Infinity B a removable battery of 2000 mAh. It is present inside the removable back cover and QMobile has provided a fine battery in this handset. It has a quad-core chipset with 4.9 inches’ screen size and spreadtrum chipset so all things work for battery saving functionality. We have tested the battery power of QMobile Infinity B and it has provided has enough efficient time to play with it. Excessive usage of 3G/4G and games will drain the battery very quickly.

Processor of QMobile Infinity B:

QMobile infinity B has a 1.25 GHz Quad-core processor and contains a chipset of Spreadtrum SC7731c. This chipset is based on the architecture of ARM Cortex-A53. Furthermore, it has a 1 GB RAM which might make it a little hard to perform multitasking. While doing so, the phone might get stuck.

Antutu Benchmarking of QMobile Infinity B:

Antutu benchmarking always give us the best test score of any device and we have tested this benchmarking on QMobile Infinity B and it has got 13632 points.

Vellamo Benchmarking of QMobile Infinity B:

QMobile Infinity B is a 4G device with an affordable price range and its features are not much impressive. The device can fulfill the requirement of those users who like to have a 4G smartphone a a very economical price.