The classic Nokia 3310 was the best feature phone of 2000s and all of us have used it once in our lives. Nokia 3310 has truly served us to the fullest few years back when we have heard less about Samsung, HTC, Sony etc. In Pakistan, Nokia 3310 has ruled for many years and it was one of the biggest hit device by Nokia company. As Nokia has launched its own devices after it has been acquired by HMD Global. Along with various other smartphones, Nokia has relaunched the iconic 3310 recently. With its arrival in Pakistan, the local mobile phone brand, QMobile has also launched the copy of 3310. The Q3310 initiative by QMobile is risky as it is always difficult to compete with the companies who have made the original products/devices. QMobile Launches Q3310 in Competition to Nokia 3310. 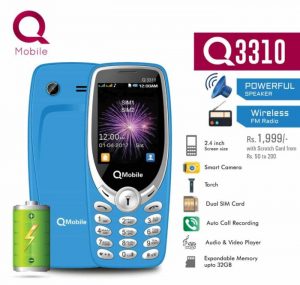 No doubt Q3310 is a true competitor of new legendary phone Nokia 3310 as QMobile has incorporated better features in it as compared to Nokia. Q3310 has bigger battery than Nokia device and users look for big battery phone in feature phones category. QMobile can attract market towards Q3310 because of its low price and battery feature.