QMobile LT550 is a 4G device with 5 inches screen display. 8GB ROM and 1GB RAM memory of internal storage gives you space to download games and applications which can be expanded to 64GB. 2000mAh Li-ion battery gives you good talk time to enjoy.  camera section is packed with 5MP back and 2MP front camera. it runs an android version of 7.0 (Nougat) with 1.3 GHz Quad core processor.

QMobile LT550 is elegantly packed in a very decent green gray box. For the guidance of user’s a quick start book is available, in which all the details are present about the device applications and operation. Accessories for a gadget such as headphones, USB Cord, and charger are available inside the box. 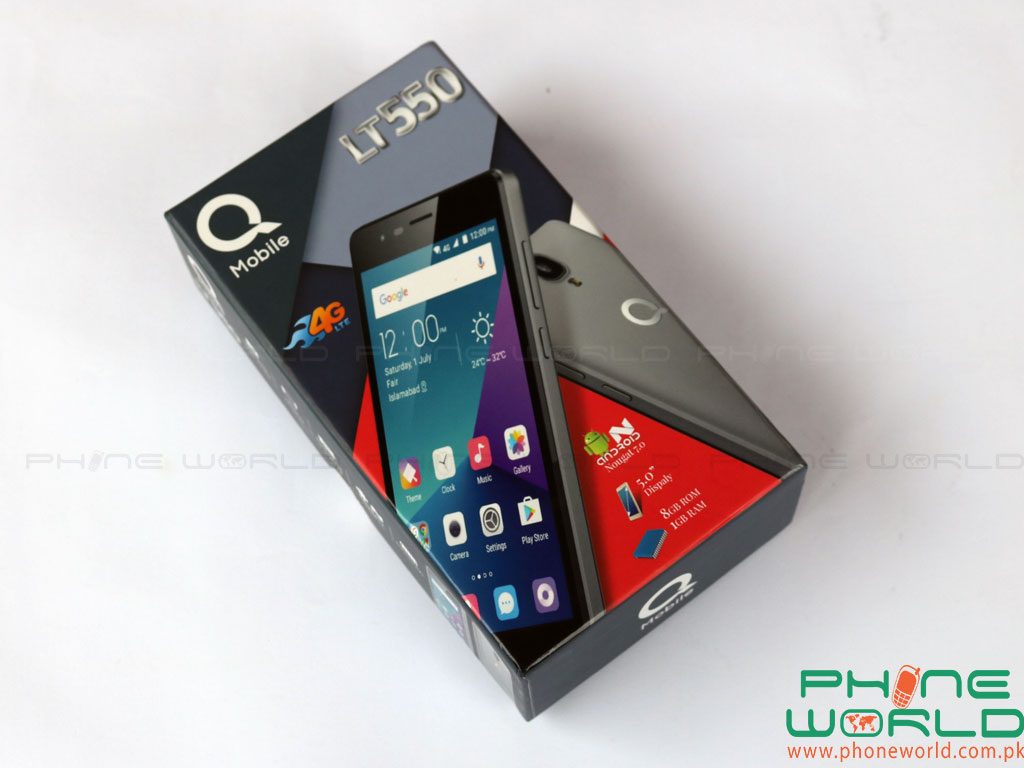 QMobile LT550 Pro is 5 inches’ device with the supportive resolutions of 480 x 854. Its resolutions are very normal and it supports 240 dpi. All the display features are a totally entry-level smart phone. Its function keys are enabled within in the front screen.

The dimensions of QMobile Lt550 pro are 142.3 x 71.3 x 8.5 mm and weight is 142 grams. It is carried with a removable battery of 2000 mAh that’s why its weight is little heavy otherwise it’s totally perfect. The lt550 front body has a front camera at its top and function keys at the bottom side while it doesn’t have any bezel layer.

Edges of the body are not much filled with connectivity ports because it has removable back cover. The top side has 3.5 mm audio jack and micro USB port while bottom side has the only mic whereas one edge has volume keys and power key.

Back of QMobile LT550 Pro has patterned designed body which has LED flash light and a back camera lens at its top left side. Logo of QMobile is marked in a center of back body.

QMobile LT550 Pro has 8GB ROM and 1GB RAM that clearly shows us that it is an entry-level smart phone. The internal memory of 8GB is not enough at all without a memory card. You must insert a memory card and then use it otherwise 8GB is nothing for applications and games. The memory card is supportive up to 64GB and place of the memory card is present under the back cover.

1GB RAM is satisfactory for the entry-level smart phone because people don’t expect much from these kinds of devices. So, it works fine with Lt500 Pro and we have not got any delays.

QMobile LT550 Pro has 5MP lens for back camera and smart camera for front one. It can record videos in 720p quality further only back camera has LED flash light. The main modes for a camera of Lt550 Pro are gesture shot, panorama and beauty mode.

Some color effects such as mono, negative, sepia, cold etc are available. The result of back camera is satisfactory per its other features.

From Front camera, we cannot expect some brilliant results because it is an entry-level smart phone. The front camera has very standard results.

QMobile Lt550 Pro is a 4G enabled device with the support of 3G also. It has access to Wi-Fi, Bluetooth and FM Radio. Wi-Fi supports the standards of b/g/n while the Bluetooth version is 4.0.

It is dual SIM supportive device with the access of dual stand by and both sims should be of standard size. The memory card has a separate place and it supports up to 64GB.

QMobile LT550 Pro should have an average battery to catch the attention of customers because in entry-level smart phone users should have a big battery. The Lt550 has just 2000 mAh removable battery inside the back cover of it. Excessive usage of 3G/4G will drain the battery very quickly.

QMobile Lt550 Pro runs android version 7.0 (Nougat) on it. It has separate application manager in which all the applications are arranged in the form of rows and columns. The search bar is also present on the top side via which we can directly search any application and access it.

QMobile Lt550 Pro has 1.3GHz quad-core processor. The handset has 32-bit type processor and it has chip set of Spreadtrum SC9832A. The chip set is faster than any dual-core chip set and with the entry-level smart phone, it has worked smoothly. We have tested it and got no delays and lags. 1GB RAM with a quad-core processor is perfect for this kind of device.

Antutu benchmarking always give us the best test score of any device and we have tested this bench marking on QMobile LT550 Pro and it has got 18803 points.

QMobile LT550 Pro is an entry-level smart phone with 8GB ROM and 1GB RAM further it has 1.3 GHz quad-core processor and 5MP back camera lens. The device is perfect for those users who like to use a 4G phone in very affordable price.