Finally, QMobile launches its ballistic smartphone to its portfolio. QMobile Noir E8, with 3GB RAM, 64GB ROM, 24 MP camera, finger print security, HIFI DTS Dual Speaker, Smart PA and a lot many features that will be discussed under the detailed QMobile Noir E8 Review, so stick around and explore the beauty of QMobile Noir E8.

Smartphones usually have pros along with an equal number of cons, yet QMobile Noir E8 has a lot many of pros with almost none of its cons discussed below.

Better smartphones with better specifications needs extra protection, look and an eye-catching display. QMobile Noir E8 has been shoved with a high wear resistant Aluminium frame along its sides that can protect your device from breakage and cracks by absorbing the shocks. This necessary frame is also been smoothly polished that enhances the look. The grip is firm at the edges and the corners are smoothly arched. The finger print scanner is the center below the camera. The high power camera is also supported with a dual LED flash lights.

Coming towards the display of QMobile Noir E8, the display of Noir E8 is 6″ that supports high resolution videos and can play HD movies. The number of pixels per inch are 640 which is greater than any of the smartphones ever launched up till now. The renderer for its display is PowerVR Rogue G6200 and the supported resolutions are 1440 x 2560 pixels. The screen can support up to 10 points multi touch over its screen. The screen is also guarded with Corning Gorilla Glass technology that leaves no scratches on the screen. Look at the HD video been played with QMobile Noir E8 with 1080 pixel resolutions.

Coming with a powerful processor of type 64 bit with frequency variations of 403 MHz as its lower and 1950 MHz as its high end. The processor is Octa core and each core of QMobile Noir E8 runs with up to 1950 MHz frequency. The chip-set is of Media Tek with chip-set number MTK MT6795. The performance is super fast and supports all the recent technologies with its super fast speed and latest version of OS 5.1 Lollipop. The temperature rise was just 3 degrees and the battery consumption was almost 15% after running with Antutu’s stability test. Which proves the stability and performance of QMobile Noir E8.

QMobile Noir E8 has been launched with a huge sea of 3GB RAM which comes in the very few number of devices with 3GB RAM. This much of RAM will not say no to any sort of app or game and will perform smoothly and effectively. The internal memory as been mentioned in the snapshots below is 64GB and this is the only device launched with 64GB ROM. If you still need more memory, you can have a memory card up to 128GB in the memory card jack.

Both the rear as well as the front camera for QMobile Noir E8 have been fantastic and both have special lenses that can capture the true colors of the surroundings. The rear camera is bulged out at the center of the upper portion of the smartphone which has been supported by a dual flash light to capture images at low light situations. The front camera lies besides the notification light and the earphone. Consult the bright display along with the purity in the snapshot below.

The result for QMobile Noir E8 along with the details have been snapped in the image below. The picture quality has been reduced to a minimum for the server. The front camera is 8MP and it takes up to 4MB snaps in a perfect day light and denser details. The dimensions for the camera of QMobile Noir E8 are (3264 x 2448) pixels. The camera is flooded with all the necessary sensors like the Geo tagging sensor, the aperture timing sensor, white balance etc. Consult the image for the performance of QMobile’s front camera details. 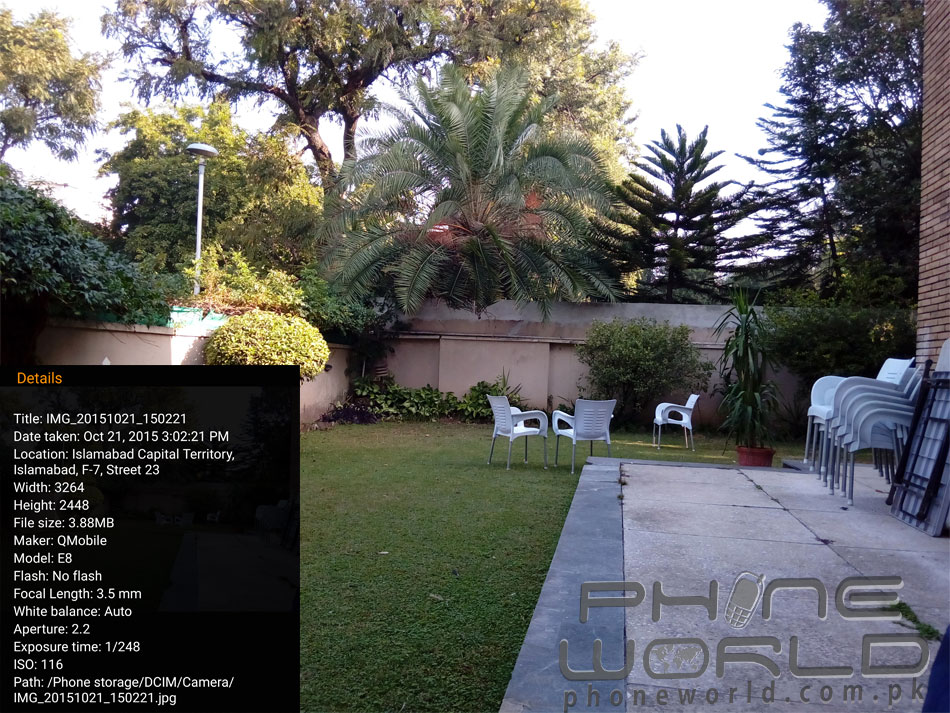 The power of the rear camera of QMobile Noir E8 is 24MP and has been supported with a dual LED Flash light to capture images at low and dim light situations. A 24MP camera has never been used by QMobile in any device before. This credit goes to QMobile Noir E8 for having a 24MP camera that can takes best images and has been supported with all the necessary tools and features that a better camera may need for. The size of the snap of QMobile Noir E8’s Rear cam reaches to 8MB and the dimensions are (5696 x 4272) pixels which are greater than any of the smartphones been launched by QMobile ever. Consult the image below for the details and power of the rear camera of Noir E8. 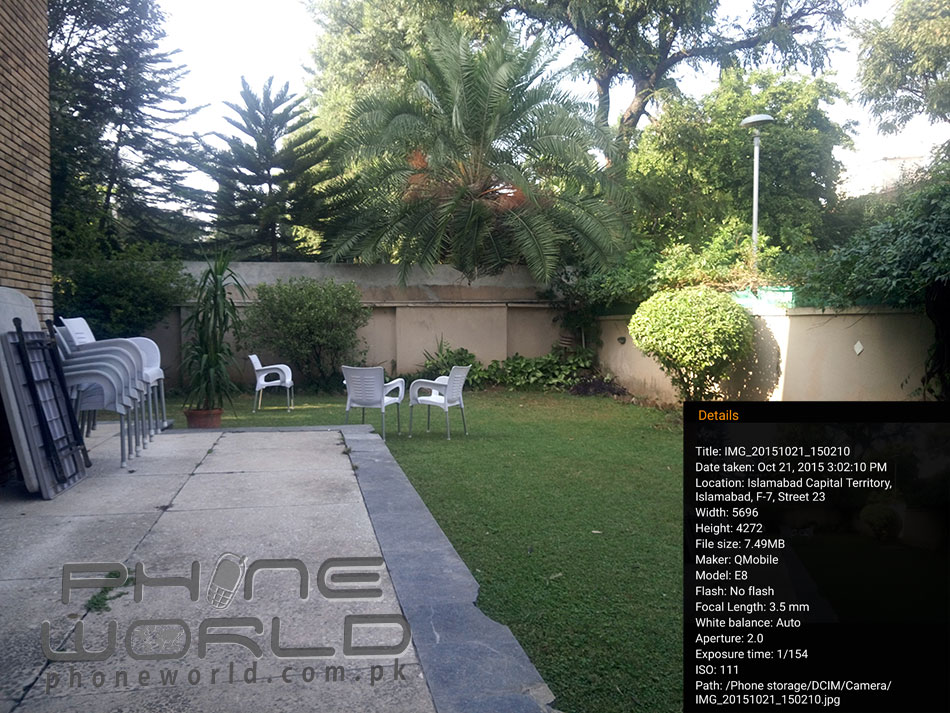 Battery is another of the customer’s choice for a smartphone with these much of better specifications. QMobile Noir E8 has a non-removable battery with Li-ion technology and the capacity of its battery is 3520 mAh that lasts for long time and you may enjoy with long calls, social media video calls, surf the internet, browse for longer and can play heavy games with a slight increase in temperature and long battery.

Below mentioned are the detailed images that explains a lot which includes a beautiful box protecting the internals. The gadgets contain an OTG cable, a perfect earphones with beautiful base in it, data cable that can be used to charge your smartphone and transfer data, a protective cover, NFC stickers, a complementary cover that can be used to protect your smartphone and protect the screen from scratches and cracks.

Though the size is bigger than the other smartphones but this is due to the loaded hardware and 6″ display been held with the metal Aluminium frame. The grip is good and you will not be feeling bore while holding your QMobile Noir E8 which is slimmer and is been just 9.6mm thick.

The following images show the necessary ports and angles containing the jacks for USB cable in the first picture, the second image shows the one key access button for the camera to take the start and get faster images. The second image also contains the power button and the volume buttons. The third image shows the audio pin jack for the earphones, similarly the last image shows the other side of QMobile Noir E8 which is indeed a sleek and well finished smartphone.

The back cover is removable and you may insert two SIM and a memory card near the finger print sensor area.

The OS used in QMobile Noir E8 is 5.1 Lollipop which is almost the latest OS which contains smooth and fine icons along with different gadgets. One thing to mention is the drop down menu which is unlike the other smartphones and you have to drag it from the bottom. The drop down from the top contains the notification panel only. You can watch the drop up menu of QMobile Noir E8 in the last snapshot below.

The keyboard and the dial pad both have cool and attractive light colors, the alphabets and number on the board don’t have well defined boundary lines. The touch is very smooth and no missing are made while typing. The third snapshot for QMobile Noir E8 shows the phone capacity of 64GB which is divided into system used and data storage as well as free portions. The fourth snapshot below for Noir E8 shows the battery level and the estimated time left if the battery is being consumed at such speed.

The speed, efficacy and efficiency of QMobile Noir E8 is such that it can amaze the people with its rank and position once checked over the bench marking applications. Though mentioned below is the battery time left for it to work, yet the performance is better than some of the top selling brands in the world.

You will be obliged to know about the performance of QMobile Noir E8 with Antutu which is an international and most trusted app used for ranking throughout the world. The score is more than 50 thousands and it proves that QMobile Noir E8 is on the top and leading edge as it has let down one of the DON of its time that ruled over the top for almost a year i.e Meizu MX4. It has a ten points multi touch screen support as shown in the last snapshot below. The processor is 64 bit type and it makes the executable operations even much faster as shown in the results below.

The scores for QMobile Noir E8 with Vellamo are also not less than other branded devices internationally. The fast processor with multi-cores makes it even better and the combined result comes out to be just following the world’s most lethal device, The Samsung’s Galaxy S6. The single core performance is though a bit lower than many of the devices because the processor’s single core’s speed is 2GHz and other devices like Samsung Galaxy S6 has 2.4GHz. The browser’s performance is also better and has obtained 2426 with chrome browser beating Samsung Galaxy Nexus. Consult the overall score for QMobile Noir E8 in Qmobile Noir E8 Review mentioned below.

CPU-z is an app that shows most of the features, sensors, battery’s performance, specifications and other info like the OS, API Level etc shown in the snapshots below.

A smartphone with 3GB RAM, 2.0GHz Octa core processor, 64GB ROM expandable up to 128 GB, 24MP Rear Camera, 8MP front camera and 6″ super AMOLED Display is a blend of great features added to this smartphone. Other features like DTS Sound system, finger print security scanner, different sensors for camera and a big power bank type battery which makes QMobile Noir E8 unique and gets a very better rank in the run of smartphones over the world. A smartphone with these specs may be impossible to be launched with a price of 45,000/- PKR by other companies like Samsung, Huawei, HTC, OPPO and others. The credit goes to the Pakistan’s number 1 Mobile brand; QMobile.