QMobile releases another smartphone with all smart features along with its patterned back cover with in a compact and handy module. The device is so called QMobile Noir i4 with in the i family so for. The i family is another innovated version and release in the advanced and swiftly grooming technology web. QMobile Noir i4 Review is about the Noir i4 smartphone with all the latest technology based modules like 1.2 GHz Quad Core precossor, 512MB RAM, 8GB ROM, 3G enabled smartphone with 1750 mAh and 4.5″ FWVGA LCD Display and much more.

Some fast specifications of QMobile Noir i4:

Design and Display of QMobile Noir i4:

QMobile’s Noir i4 design is perfect with a little weight of just 124 grams and the dimensions are 133 x 65.5 x 9.5 mm that keeps the Noir i4 in the handy and compact category. The back cover is beautifully patterned with rigid lines that flows all the way down in a diagonal move step wise. The charging port is at the left side of the smartphone and the lower portion has a shiny steel base that further enhances the beauty. The audio jack of 3.5mm is at the center at the top. The volume and power buttons are at the right side of QMobile Noir i4. The screen also has touch sensitive buttons at the lower portion for back, home screen and options with no LED lights.

The display is a 4.5″ FWVGA LCD Display which has a little viewing angle issue while viewing from the top at an angle slightly. The dimensions are 854 x 480 pixels. The driver for GPU is Mali-400 MP which is rarely used in all entry level smartphones with a Quad core processor. The number of frames are 60fps. The number of pixels per inch are 240 dpi. The screen has 2 points multi-touch capacitive support.

Processor of QMobile Noir i4:

Powered by a processor somewhat different from the processors being used up til now. QMobile Noir i4 has a 1.2 GHz Quad core processor with 4 cores and frequency variations of 728.0 and 1200.0 MHz. The chip-set is Spreadtrum SC8830. The architecture of the processor is 32Bit.

Memory for QMobile Noir i4 Review:

QMobile Noir i4 has just 512 MB RAM which would have been better if there were 1GB RAM. The internal storage is 8GB and can be expanded up to 32GB by using the memory card jack after removing the patterned back cover. Watch Here

Camera within QMobile Noir i4 Review:

QMobile Noir i4 is an entry level smartphone with better specifications at low cost and are affordable with that price. The camera of QMobile Noir i4 is a 5MP Rear Camera and the front cam is a VGA Camera with 0.3MP power which can be used for selfies with dimensions of (640 x 480) pixels.

Rear Camera of QMobile Noir i4:

Below mentioned is the picture snapped with the Rear camera of QMobile Noir i4. The strength of the Rear Camera of QMobile Noir i4 is 5MP and the size ranges from 1.2MB to 2MB whereas the dimensions are (2592 x 1944) pixels. The size varies with the intensity of light and variations in colors. The quality, dimensions, size, aperture, white balance and all the details are given in the snapshot below. 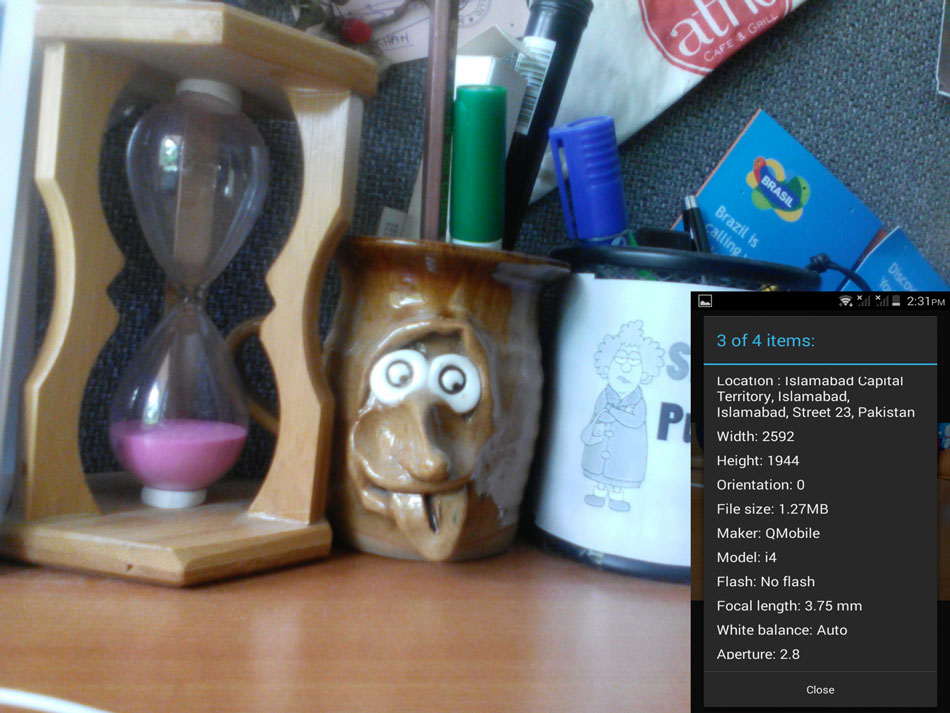 Front Camera of QMobile Noir i4:

Below given is the snapshot been taken with the from 0.3MP front cam which can also be called as a simple VGA Cam. The quality, dimensions, size, focal length are all given in the snapshot below. The dimensions are (640 x 480) pixels and the size ranges from 100 to 300 KBs depending upon color variations and light intensity. 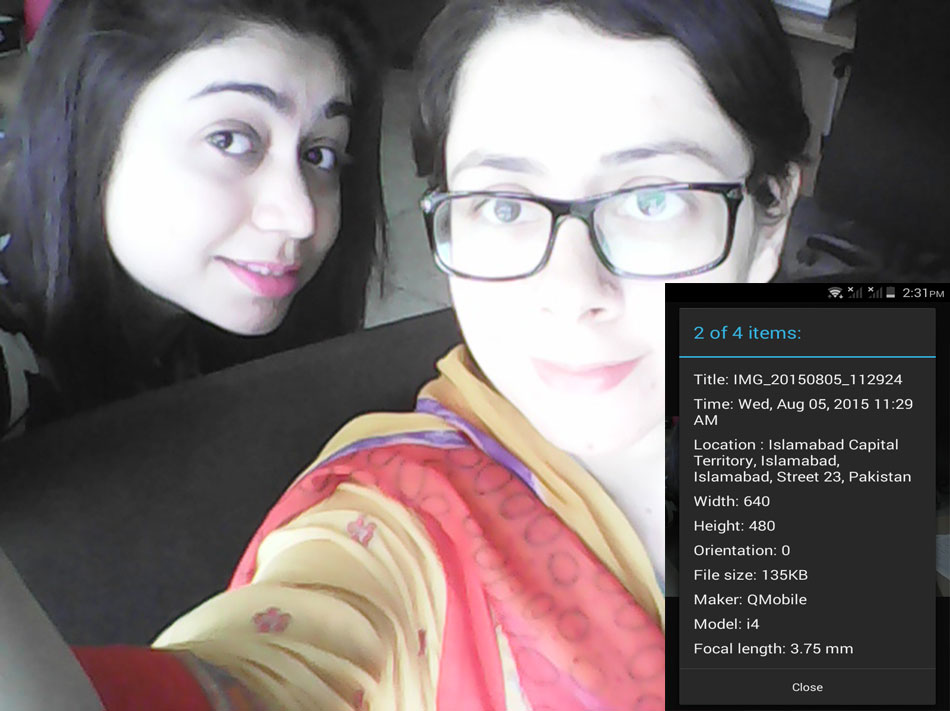 QMobile Noir i4 is 3G enabled. Following are the frequency bands for QMobile Noir i4 Review. Noir i4 is a dual SIM supporting device. SIM 1 can handle 3G bands as well which are WCDMA (900 / 2100) and HSPA as well.

Battery performance and Internal Storage of QMobile Noir i4:

The capacity of the battery of QMobile Noir i4 is 1750 mAh which already seems low and still the performance of the above mentioned battery is very poor and it drags down at an abrupt speed while testing it with apps and games. Although with almost 60%, Noir i4 shows about 19 and a half hours capacity, yet with its use, you will get it just for a couple of hours and you may need to recharge your phone two times a day.

The external look of Noir i4 is very good and looks beautiful with the patterned back cover and the shining steel base enhancing the beauty. The box contains a 1amp charger that will charge your smartphone in no time, a USB cable that you may use for charging your smartphone and data exchange purpose. The hands free is good and has the normal foamy type ear pieces that covers the full canal of the ear and you may have better quality sound. If you have any issues about the QMobile Noir i4, you may watch the user manual as well lying in the box.

The in-hand images about QMobile Noir i4 looks cool and handy with its 133 mm height and 65.5 mm width that can be perfectly grabbed with in the sole of your hand. The 4.5″ FWVGA screen is well shaped that you may touch the all four corners of the device with ease and success. Don’t forget to watch the patterned back cover in third snapshot.

Below mentioned are the different dimensions of QMobile Noir i4 as well as the internal look after removing the beautiful patterned back cover. Weather you want to introduce a SIM of an SD card, You have to remove the battery with 1750 mAh capacity .

The internal interface of most of the entry level smartphones have been used just as they have been used in QMobile Noir i4. The home screen along with the internal screen have been shown in the snapshots below. The third snapshot shows the system phone interface.

The layouts for typing texts and making a call have been used the basic and standard with the QWERTY keyboard and blueish interface buttons for the dial pad. The third snapshot shows the battery and the capacity of the battery. The fourth snapshot shows the internal storage and the amount of data available with in the Noir i4 that can still be expanded to 32GB with a microSD card.

Every smartphone must have some cons and must have some pros that should be revealed before the users before they become a prey of a smartphone which is not suitable for him/her. QMobile Noir i4 has been tested with Antutu, Vellamo, Neenamark 3D for its performances and results shown in the content below.

Over 17 thousand points with Antutu(an international bench marking app for testing smartphones) for an entry level smartphone with just 512MB RAM and 1.2GHz Quad core processor is an achievement by QMobile Noir i4 because no one can expect too much from a smartphone with such low price keeping the device with this budget. The rank is given in the second snapshot. The CPU details in the third snapshot. The last snapshot shows the device with two points multi touch support.

Checking the smartphone QMobile Noir i4 with Vellamo for single core, multi core and for its browser’s performance. We obtained the following results which are mentioned in the snapshots along with their individual rank.

CPU-z for QMobile Noir i4 Review:

To check various modules and their results and specifications have been checked by CPU-Z for the processor, RAM, ROM, Sensors, Battery, GPU etc as shown in the snapshots below.

Checking the (GPU) graphics performance of QMobile Noir i4:

QMobile Noir i4 was unable to install GPU Benchmark. We made a better plan and checked QMobile Noir i4 with NenaMark2 which gave us with the results that the GPU of Noir i4 is performing better than Samsung Galaxy S2, ASUS Eee Pad Transformer Prime and others as mentioned in the second snapshot. The number of frames were 60 frames per second with its Mali-400 MP driver.

Conclusion for QMobile Noir i4 Review:

With in a price range of just Rupees 7,250/ PKR, with 1.2GHz Quad core processor, 512MB RAM, 8GB of huge space along with 1750 mAh battery being run with Android OS 4.4 Kitkat and 5MP Rear Camera and a VGA front camera with a few compromises. QMobile Noir i4 is a better choice that can be efficiently used for Whats-app, Facebook, Skype, other social media, YouTube, browser etc with its fast processor.