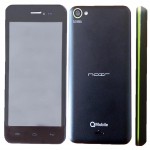 QMobile has taken a forward step in the field of technology and has launched an extension of noir i5 with an amazing and stylish smartphone which is said to be Qmobile Noir i5i and is available in different stylish and cool colors. This mobile is powered by 1.3 GHz with QuadCore processor that was once Dual Core and the Ram has been changed with 1 GB which was prior 512 MB. The internal storage is the same as it was in the previous i5 i-e 4 GB and can be extended to 32 GB with MMC chip. The latest Android 4.4 (KitKat) software platform has been integrated to this smartphone. It has a 4.5 inches of FWVGA touchscreen. This device also supports 3G technology. The battery size has been reduced to increase the beauty and sleek look and design but it has an impact that the life has been reduced to 1700 mAH from that of 2000 mAH. The device has 5 Mega Pixels of rear camera with LED Flash and a front camera with 0.3 Mega Pixels strength. Other features like GPS/ Geo-tagging, Proximity sensors are also embedded in the smartphone that enhances its attraction among the customers. Other point that becomes the center of interest of people is that, the price has been kept low and can be afforded by anyone who has a wish to buy a smartphones. The device also contains an multicolor indicator light near the earphone that changes its color at different timings.

The box contains all the necessary accessories that includes ear phones, charger, data cable, user manual, a smart pouch and a disk that contains the drivers.

QMobile Noir i5i review is all about the 1.3 GHz Quad-core processor & 1 GB Ram along with pictures, cons and pros and much more.

The following snapshots will help you get a close look at the smartphone named noir i5i.

The internal features and menu are shown, so that the idea might come clear to the customers about the inside operating system of the smartphone. Certain features are quite good from users point of view, like the menu consists of certain features like flipboard, an FM Radio, a cool calendar, instant notes, built in browser, a single click backup restore option app, built in torch etc. The Qmobile folder also contains built in applications like facebook, Skype, Whatsapp, QAlbum, NQ Mobile security, QStudio and QMobile care.

Consult the snapshots below:

The results for QMobile noir i5i with vellamo have been satisfactory in all aspects and noir i5i have been somewhat in the middle of the race. So for the results have been shown in the chart below.

The detailed information have been shown in the following snapshots below.

Antutu shows the overall performance and shows the device to be very disappointing. This may be a reason of the other smartphones that have Octa Core processors with very high power and good memory. Although it shows that the performance is good, yet to be at the top, QMobile has to make a huge jump.

Consult the results below:

The overall chart, that shows the overall performance is shown below: