QMobile Noir LT500 is shipped with usual accessories like USB cable, Hands free and the last but not the least 1amp charger. The hands free is of average quality that usually all QMobile boxes has same quality of handsfree. The travel charger is there for charging.

QMobile Noir LT500 is a  stylish, catchy and handy smartphone that can be easily handle in hands and can be operated with single hand due to it dimensions that is measured 143 x 72 8.5 mm (approximately). The light weight feature makes it handier as it weighs just 135 grams. The white ribbon around the sides splashes more beauty. The sides are covering all the necessary ports and physical button. QMobile Noir LT500 is designed in way that can give more ease and comfort to operate. The top side is carrying audio jack for hands free, likewise the volume rocker is housed at left side and power key is placed at right side, while the MicroUSB 2.0 port is fixed at bottom.

QMobile Noir LT500 is provided with 1GB RAM and 16 GB of internal storage. The main memory of QMobile Noir LT500 is 1 GB that can fetch 2 3 apps at same time but it should be light apps like Facebook, Whatsapp, however if you play high graphics games that would lags and causes irritation. The internal memory as discussed is 16 GB yet you can expand it upto 32 GB more with microSD card.

QMobile Noir LT500 has average camera sections such as it carries 8 MP AF camera on back as its predecessor QMobile noir lt700 is having  the same lens, the front camera of QMobile Noir LT500 is 2 MP which is less than that noir lt700 is carrying. The camera has average quality yet responsive and usable. The camera app has several settings options that enable you to play with both cameras. The resolutions of image can be set and several more options that will enhance the passion of photography. 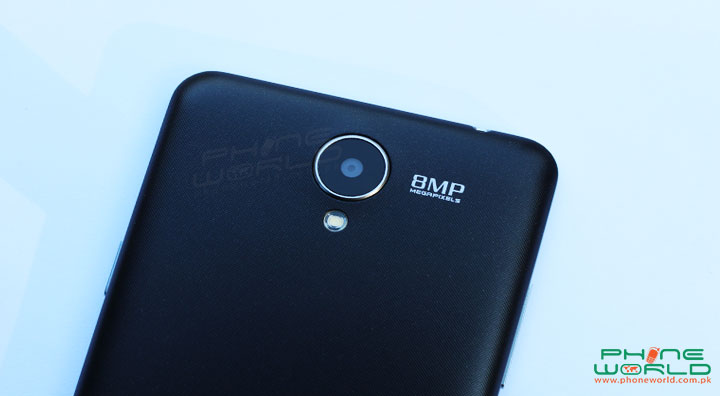 QMobile Noir LT500 carries 8 MP Autofocus rear camera with LED flash. The camera has sound quality that you expect from a mid-level smartphone. The camera has many pre-defined modes that you can choose for suitable occasions, there is a beauty mode for increasing the beauty of face detected by camera, and further modes are HDR, Panorama, Burst mode and amazing feature of detecting victory sign. The rear camera has HD recording feature that you can record your memorable videos. The camera image quality is as good as you count it mid-range smartphone. The camera resolution is (3840 x 2160) pixels which is better and decent.

QMobile Noir LT500 is equipped with 2 MP front camera that it’s an ordinary camera but still works fine for usually selfies at least better than none. The camera has (2048 x 1152) pixels. The image quality is not bad in fact good and reasonable.

QMobile Noir LT500 is 4G/ LTE supported smartphones other than that it also support 2G and GSM networks. It supports HSDPA data traffic which is faster than normal 3G. Here we have mentioned all frequency bands that it supports.

QMobile Noir LT500 is provided with 2000 mAh battery backup capacity. The battery has average standby and can last 1 and half day in case if you don’t use 4G frequently; otherwise you have to charge it twice a day. It would have been better if QMobile Noir LT500 was packed with at least 2500 mAh capacity battery.

QMobile Noir LT500 is mid-level smartphone with quad core processor and average specs that is designed for common man who uses smartphone for using social media etc. QMobile Noir LT500 got 20056 points which is decent score for mid-level smartphone with these specs. The stability chart is a bit disappointing because its stability is under the 50% and graph is also dancing through the test. The touch screen supports two point multitouch.

QMobile Noir LT500 has checked with vellamo bench mark app for checking the performance thus it was satisfactory. Actually vellamo is consist of multi tests that’s in multicore test it got 1246 points and 755 point in multicore test that shows it is mid-level smartphone.

QMobile Noir LT500 has quad core processor with Mali-T720 GPU which controls the graphics and images that appear on the display screen. The bench mark score is not up to mark although the display is 720px HD IPS and controlled by Mali-T720. The average fps is also less proves that it is not perfect smartphone for gaming. 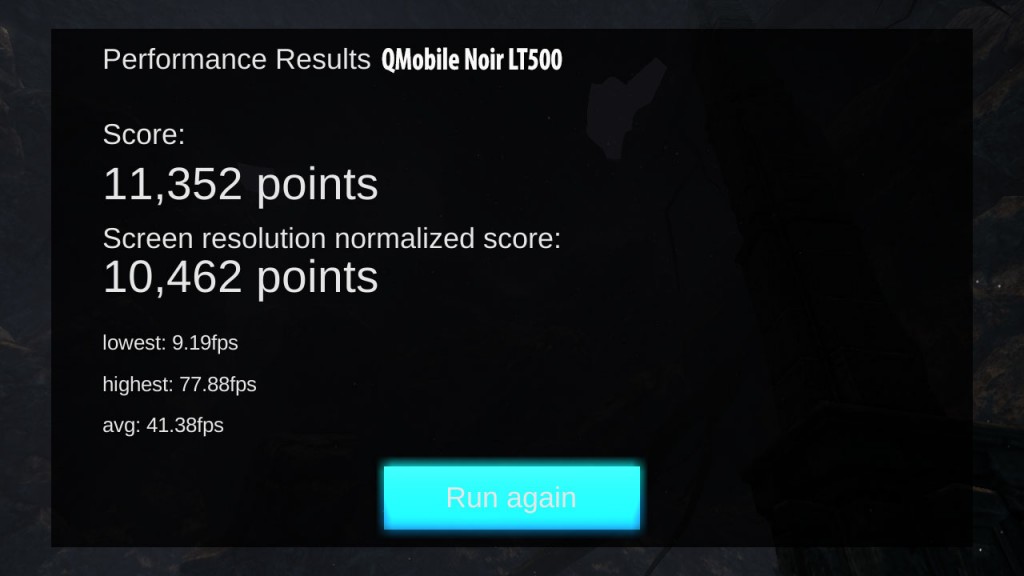 QMobile Noir LT500 is mid-level smartphone with decent specification that includes 1.0 GHz quad core processor paired with 1 GB RAM and 16 GB ROM, mesmerized with 5” HD IPS display. The camera section suits with 8 MP with LED flash and 2MP front camera. The connectivity section is right up to the mark with LTE support. QMobile Noir LT500 is good package at affordable price of PRs: 10,500 and hopefully you will be satisfied with it.