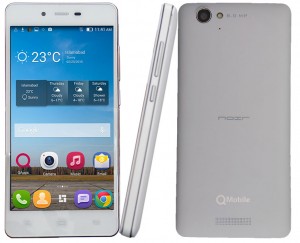 Noir M300 is launched by QMobile with latest version of Android with latest SDK version 4.4 Kitkat, powerful 5000 mAh battery, 5″ HD display with IPS screen that has beautiful interface and attractive price of Rs: 18,000 .

It has dual cameras, the rear of which is 8 MP with (3264*2448) resolutions supported with an LED flash light and 2 MP camera with 1600*1200 resolutions. The back cover is perfectly smothered that lays nice sensation to the palm of your hand. Supports dual sim with sim-1 specifically active for 3G. The beauty and hardness is further increased with a metallic ring round the borders with two silver colored rings at both edges of the ring. QMobile Noir M300 Review will guide you through all the stages of look, power and specifications of this device.

It has been powered with (1.3 * 4GHz) MTK MT6582 Quad core processor of 32 bit type with 4 cores and frequency variations in between 598.0~1300.0 MHz. The Graphics has been boosted with ARM chip of GPU Version OpenGL ES 2.0 as do most of the QMobiles have been embedded with.

Amazing thing is the battery that has 5,000 mAh capacity that is best suited for games, movies and selfies and video recording. The device will be famous among the business tribe for its large capacity and long backup.

The device has been named as Marathon because Marathon is a very long distance racing event with an official distance of 42.195 kilometers. The signal of Marathon is used actually to compare the battery of 5,000 mAH with that of marathon, which must work for very long duration.

Work has been done on the sound system of Noir M300. The speaker is present at the back side just below the QMobile logo. The sound has been modified for better results with dts Sound system.

The external images may not clearly make you feel how would the Noir M300 look with you in your hand and you may not be able to sense it, yet the design and shape has been made such that it can easily mold in your hand and the grip get increased when you fetch it in your soul.

The pack contains charger, USB Cable, a flip cover for the safety of your noir M300 along with a multimedia headphones so that you may talk to your owns while driving and enjoy the FM radio when you get bore.

The interface has been the same custom one that the QMobile uses for the most part with cute rounded icons. The keyboard for messages and the dial pad for dialing a number are used the typical and standard ones with a light green interface. The touch screen supports up to five fingers consecutively. Certain built-in QApps are pre-installed which consists of social media apps like Facebook, WhatsApp and Skype along with others. The camera along with the features are shown in the snaps below.

The interfaces for both keyboard and dial pad for sending SMS, MMS and dialing numbers are used the typical ones, used by QMobiles mostly and are the standard ones, the users are already used to.

Camera consists of the following options as shown in the snap below. The second snapshot shows the number of touches that a user can put information in with his/her fingers for performing multiple options like zooming-in and zooming-out in camera menu and playing different types of games that needs multiple touch for different combos and tricks consecutively.

(QMobile Noir M300 comes in the mid-end category and have smart points with better position at the board, scoring approximately 19 thousand score.)

Been tested with 3D Mark (An application that checks the power of GPU(Graphical Processing Unit), the points for 3D graphics and over all performance of QMobile Noir M300 came out to be better exceeding 2000 and you can enjoy games with better graphics and efficiency).

QMobile Noir M300 is a set of choice for those who want to have both tastes.