Once again QMobile has taken the edge over its challengers and launched QMobile Noir S3 smartphone; which belongs to famous S-series smartphones. In QMobile noir S3 review, we will try to cover the all aspects of smartphone and at end of review you will have brief knowledge of smartphone including its pros and cons. It is successor of QMobile Noir S2 with new look and equipped with advanced hardware. The smartphone is facilitated with amazing features and specs of latest technology. Qmobile Noir s3 has got powerful Quad Core processor that runs on 1.2 GHz clock speed along with huge memory of 2 Gb RAM. The QMobile Noir S3 is powered by well efficient android 5.1 Lollipop with multitasking environment to run many apps at a time. The smart 5.0” inches HD IPS display is to keep you enjoy HD videos and high graphics games. Thanks to 8 MP rear camera and 5 MP selfies snapper to capture the precious moments for you. Never the less equipped with powerful 2000 mAh removable battery; that is for sure keep your Qmobile Noir s3 alive for longer time. On the connectivity section, Qmobile Noir S3 comes with WiFi, WiFi Hotspot, Bluetooth 4.0, Radio, and last but not least it is  also 3G enabled smartphone.

Now we will dive into the detail QMobile Noir S3 review. 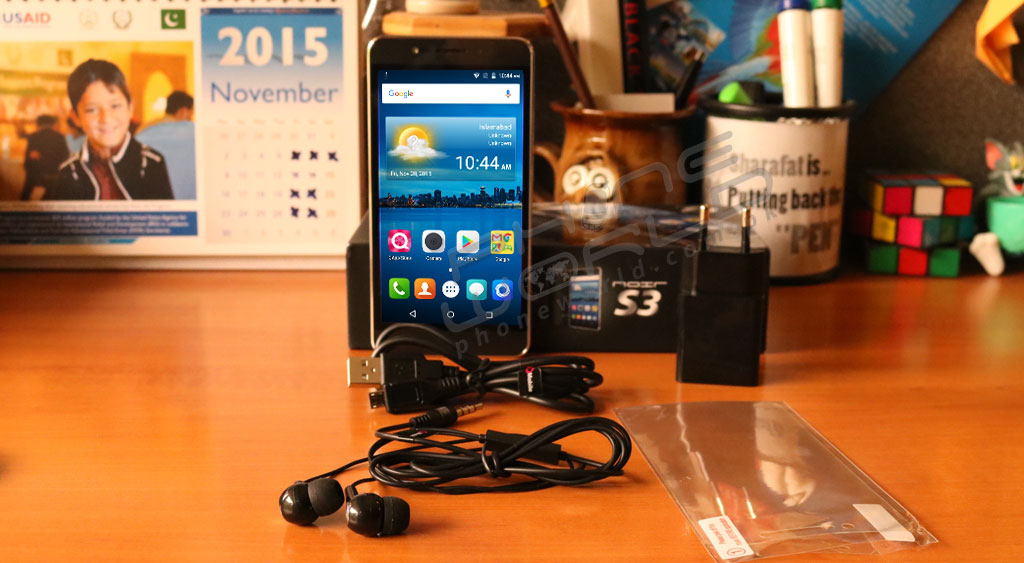 Qmobile Noir S3 is a striking , catchy, smartly designed smartphone with outstanding features, as the dimensions show it is crafted according to sole of hands which perfectly fits in hands. It 147 x 71x 8 mm thick and weigh just 141 grams; that makes it easy to carry while doesn’t feel as heavy as brick carrying in the hand. Due to the thick silver bezel around the display it becomes more beautiful and catchy. Its shiny silver color bezel looks alluring and attract the eyes at first glance. The rest of things are placed nicely and timely. The smartphone we tested at our lab has grey color having shiny look. 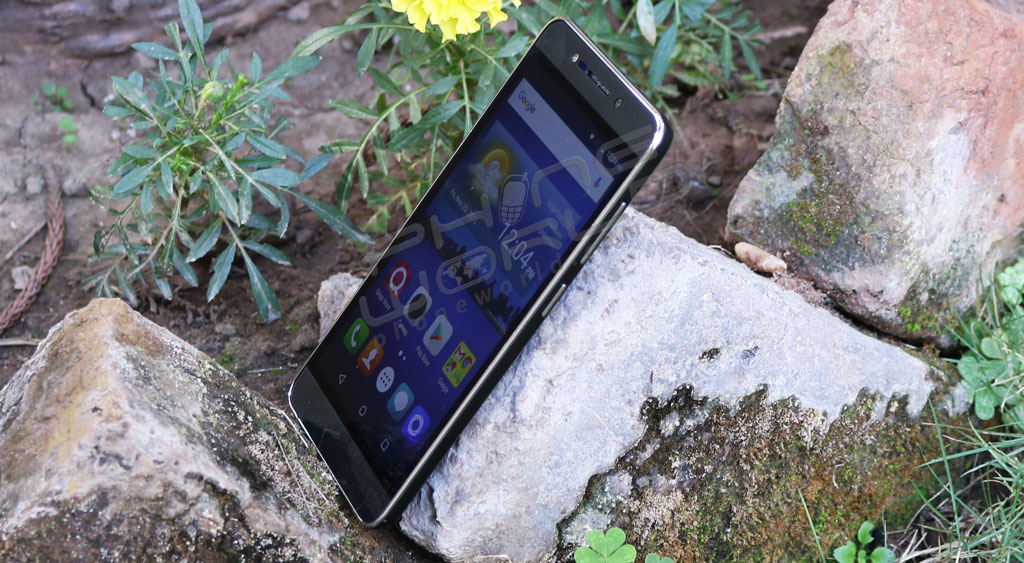 The QMobile Noir s3 is packed up with large shiny and striking 5.0” HD IPS display, which covers almost 80% of front area. The display screen has 720p resolution which is quite perfect to play HD videos and high graphic games like Temple Run, Subway etc. The wide 5.0” display is enriched with 320 dpi which makes the screen look fresh and clear. The HD display screen has 720 x 1280 resolution with quality result. Further the wide display has 5 point multitouch capability, While the graphic department is controlled by Mali-400 MP GPU. 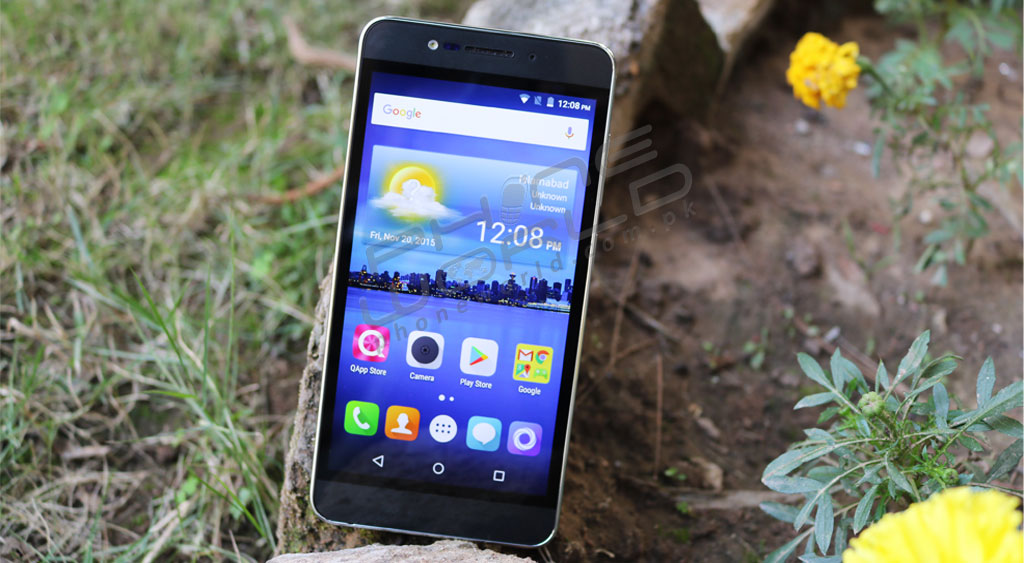 QMobile Noir S3 is powered by powerful 1.3 GHz , Media Tek processor of model MT6580; its frequency fluctuates between 604.0 ~1300 MHz which gives smooth platform to run apps and switch among the running apps easily. The processor supports dual sims, 3G on Sim 1, 720p display, 1080p of video encoding and decoding, Bluetooth 4.0, and embedded GPS module. The Mali-400 MP GPU is employed to accelerate the display graphic and 3D images smoothly. So QMobile Noir S3 has employed an efficient processor with stable performance and reliable result to provide good experience for its valuable customers.

QMobile Noir S3 is a new creation by the brand which is having 2GB RAM to assist the processor and 16 GB of ROM to store your valuable data for long time. 2GB is an ideal memory space while you are working with Quad core processor that makes a smooth and ideal environment to run several apps. Huge 16GB space can be further expended upto 64 GB as per need of user with MicroSD card.

QMobile Noir S3 having 8 MP camera with LED flash and 5.0 MP front camera for selfies backed with its own LED flash. Both cameras shared same settings section while the different preset modes are not shared equally between both shooters. Both cameras have good result with quality image and able to take shots in low light with powerful flash. From the settings section , we can enable Geo-Tagging , exposure, color effect, scene mode, white balancing, image properties etc. where you can restore the default settings. 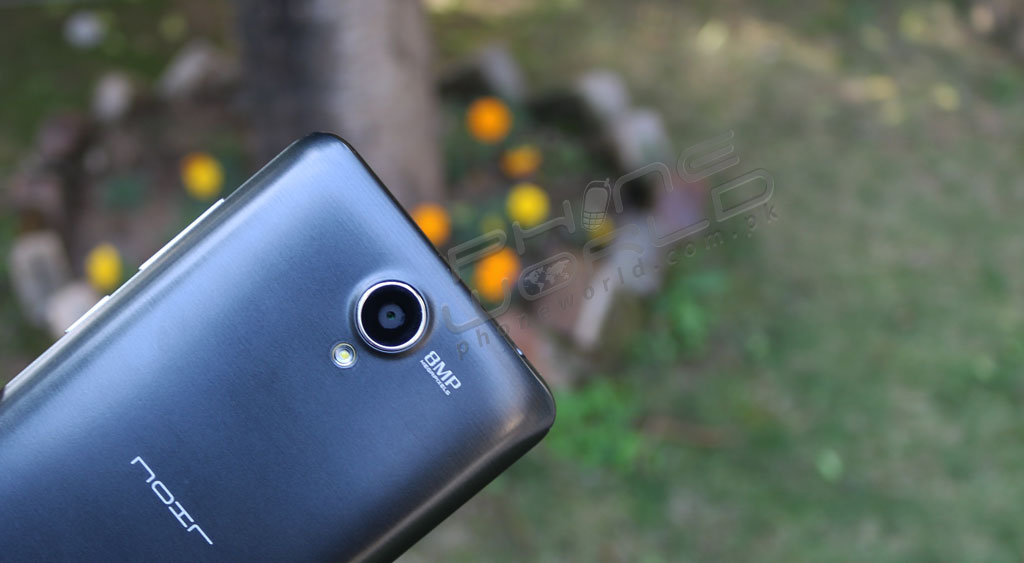 Qmobile Noir S3 comes out with elegant 8 MP AF along with sharp LED flash. The camera has less responsive time with great result. The camera has got some awesome predefined modes that can be chosen according to the occasion. The different modes are Best Shot, Panorama, Face Beauty, Motion Track mode, Live Photo and Normal Mode. Further it is also capable to catch victory sign for capturing image, smile face detection and last but not least HDR mode for a perfect colorful image with reduced noise. Qmobile Noir S3 rear camera is able to record 1080p HD video. The image resolution is 3840 x 2160 that is itself a good result. 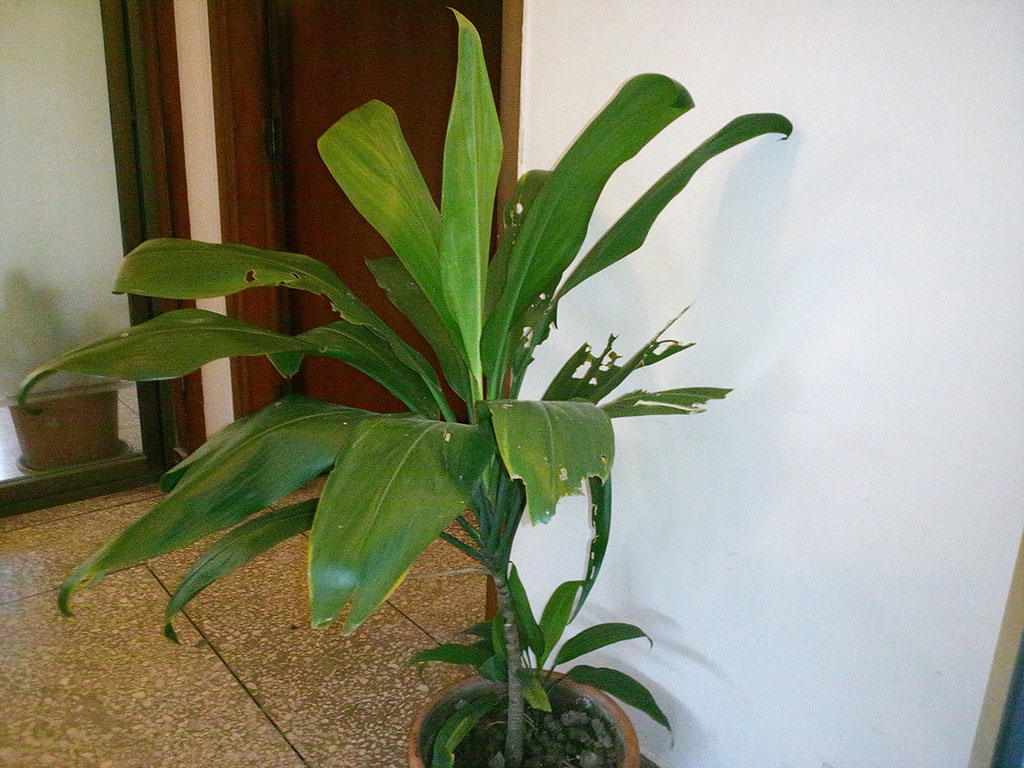 Qmobile Noir S3 has shown generosity with front 5 MP camera with LED flash support that helps you to shot in low light. 5 MP camera with great result is more than its price, its image resolution is 3072 x 1730 with crystal clear result. While there is only face beauty feature is available for selfies snapper. In addition it is gifted to record HD videos. 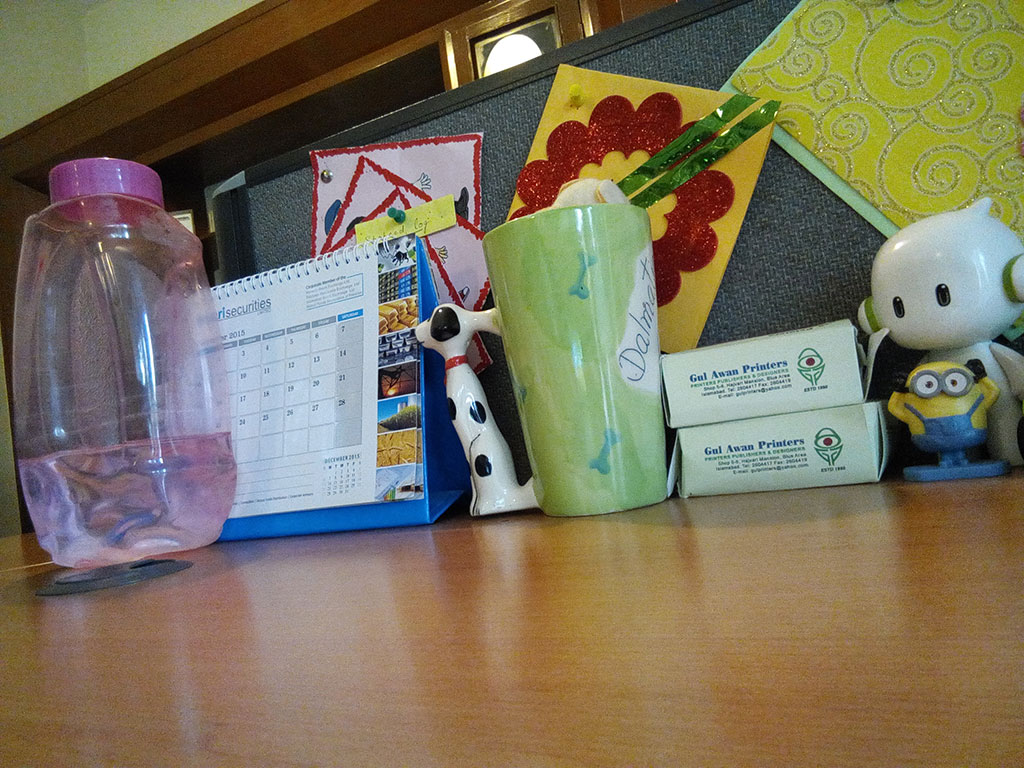 QMobile Noir S3 is equipped with powerful 2000 mAh removable battery, that for sure works more than its worth, the battery has almost 4 days standby time, while it gets down a bit rapidly on 3G calls. QMobile Noir S3 comes with 1.5 mA charger that promises to charge the battery quickly. QMobile Noir S3 been well managed by 2000 mAh battery for normal daily usage like messaging and phone calls. You can watch HD movies and play games for long time once you fully charge QMobile Noir S3.

The Qmobile Noir S3 has designed with great look, remarkable colors, shiny thick bezel around the screen and plastic back cover with matte grey. On the edges it looks nice , sophisticated and stylish with silver and grey color, the top section has 3.5 mm audio jack to earphone support, volume and power button are positioned at right side with good feedback , while microUSB port is located at base.

Qmobile Noir S3 with dashing design and graceful looks make it more beautiful; it looks great and influential in hand that attracts other sights. On the front side it 5.0” HD IPS display that almost cover the 75% of front area. Its dimension as mentioned earlier portion of review are nicely crafted and weight is just 141 grams. Its has got matte grey plastic back cover , with centred noir logo, the back camera is positioned at top portion along with LED flash, powerful speaker at the base will make you move your feet with music.

On the front side it 5.0” HD IPS display that almost cover the 75% of front area. The dimensions that are mentioned in the earlier portion of review are nicely crafted and weight is just …. Grams. Its has got matte grey plastic back cover , with noir logo centred at back , the back camera is positioned at top portion along with LED flash, powerful speaker at the base will make you move your feet with music.

QMobile Noir S3 has been tested by various standard apps to check its performance during the execution of several task at same time. We have engaged Antutu and vallamo apps to examine the smartphone. The result will be shared with you in below paragraph in detail.

QMobile Noir S3 has been tested with Antutu that compare different specs like RAM, Processor, I/O device and GPU of smartphone with other smartphones in market and give you a score which is given according to smartphone performance. Qmobile Noir S3 scored a decent score of 20,187 points, which shows it is quite stable and serviceable smartphone

Vellamo checks the fruition of browser, metal (single core) and multicore. In browser test in check the performance and response by applying different test. In metal test, vellamo checks the might of single core by giving a task like apply different loops and floating calculation. While in multicore it checks inter-communication of cores.

The following points show that QMobile Noir S3 is perfect for normal use and will not let you bore with its performance and speed.

While testing the Qmobile noir S3 with GPU benchmark apps, we came to know that it has average GPU with serviceable performance, as it has 5.0” HD IPS display with 320 dpi and controlled by Mali-400 MP, although the score is not quite admirable yet you can play HD movies and games. QMobile Noir S3 is a mid-range smartphone with commendable hardware. 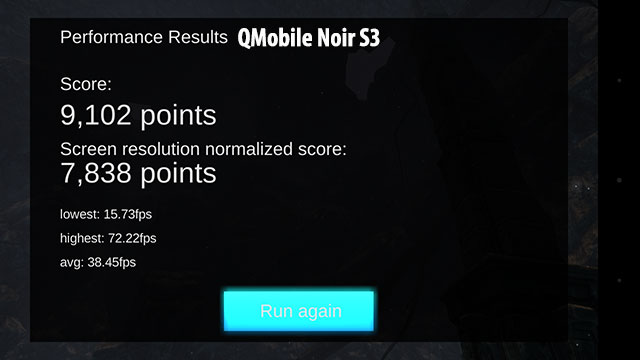