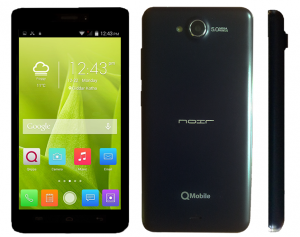 While galloping towards a better position in the race for thirst and urge in the users for selecting a smartphone, QMobile company has launched QMobile noir V2 with a wide screen and 5.5 inches FWVGA LCD display with 1.3 GHz Quad Core processor. The smartphone has internal Rom of 4GB and can be extended upto 32 GB according to the use and need of its users. Many of the features are same as that of QMobiel noir i5i like the Ram which is 1 GB, Processor which is 1.3 GHz Quad Core with model number MT6582 and many more. The GPU Version is OpenGl ES 2.0 and resolution is 480*854.

Consisting dual cams, the rear one is 5 Mega Pixels with a flash light assisting it with capturing ability of 2880*1728 and a front camera with 0.3 Mega Pixels and resolution of 640*480.

Unlike the noir i5i, this device has a big screen and HD supported like that of noir i5i, the device also consists of GPU Version with OpenGL ES 2.0 and with resolution 480*854 with density 240 dpi. Another feature is that, it is integrated with multitouch capacity with up to five fingers touch capacity.

The device consist of 2820 mAH battery which is far more better than that of noir i5i which consists of 1700 mAH battery.

The device has Android Version 4.4.2 (KitKat) and can be upgraded to latest version as well. The Android SDK uses the API level 19 which is latest and consists of many features that the other versions don’t have in them. The kernal version if Linux version 3.4.67.

When tested through certain applications like Antutu and Vellamo, the results were just satisfactory and good never underestimating the other international phones to be very good, excellent and even outstanding as well. The results are shown below.

noir V2 gets 19155 points and shows the results to be good. Although Antutu itself reviews about QMobiles and tells them to be poor devices and suggests for working harder to participate in the long run in the international market for fame in the community of smartphones. The snapshots have been shown that shows the exact performance of this device.

The main feature that distinguishes QMobile from other smartphones and devices is that if the QMobile is very low at the results shown in the Antutu, yet the low and affordable price encourages the customers and users to have QMobile in a large quantity. This makes it clear that at least something is better than nothing.

Another main thing is the dependence of the people of Pakistan that praises the device only if it is good at certain features like, if it shows video songs and play movies and have a high volume and costs low, the device is highly accepted and soon becomes the center of focus in the nation unlike the other advanced countries that check the performance of a device and  satisfies themselves fully for High Resolution Games and High Quality Graphics with better performance of the processing unit. The QMobile is taking good advantage of this fact and is thus making products and varieties in large amount that took QMobile up and at the top level.

The chart shows the ranking of QMobile along with other devices below:

The benchmark used to check the performance of the visual graphics card and the support of the CPU and the number of frames per second and then comparing the results of the device, that is used here is so called the GFX Bench. This device has the score of 910 in the ALU(Arithmetic and Logical Unit) and puts its self in the category of  the devices that have good rank and number in the run for graphics.The rate of number of frames is (30.3 fps) as the device is built with GPU processing unit of ARM technology and the model number is ARM Mali-400 MP2 (dual core) that sustains its position in the best devices in the category of graphics.

The dual core graphics processing unit (GPU) in association with the CPU quad core performs great and gives high score. The results can be shown in the following snapshots.

The performance of RAM with Processor and with the GPU is shown in the Vellamo. The rank of metal with vellamo is 8th which comes after Asus Nexus 7, HTC One, LGE Nexus 5, Samsung Galaxy S5, which comes after LGE LG G3, HTC One (M8) and the top ranker is One Plus One which is at the top and have excellent result of 1653 points.

Consult the image gallery that shows the overall performance of different components of the device.

We are sorry for inconvenience for the result of the multi-thread snap is not shown in this gallery due to some sort of error, that occurred while checking the performance through the app.

The device has an easy grip and can easily fit in the soul of hand and is quite well finished. The beauty is also exaggerated with the sleek and cool look of the device. You don’t believe me, go ahead for the snapshots.