QMobile Noir W70 has launched with 4.0” inch FWVGA display, 1.3 GHz Quad-core processor in combination with 1 GB RAM and powered with efficient Android 5.1 (Lollipop). Other than that, it has 8 GB internal storage, 1850 mAh battery capacity. The introduction completes with 5 MP rear camera and 2MP front snapper. Noir W70 is available in three different color black, white, and sky blue. It is available in Pakistan at price of PKR 7650/-.

QMobile Noir W70 is shipped in a rectangular Navy blue color box. The box holds Noir W70 at top, beneath you will find usual stuff including 1.0A charger, data cable, headphones, screen protector and back cover.

QMobile Noir is packed with 4.0 inch FWVGA capacitive screen –though its predecessor had HD IPS display. The screen resolution is 480 x 854 pixels with 240 dpi. The capacitive touch is smooth and soft that doesn’t feel sticky. The capacitive panel is enough responsive to let you control the smartphone with fingertips. The screen is pretty bright that can easily viewable in sunlight and well managed and controlled by light sensor. 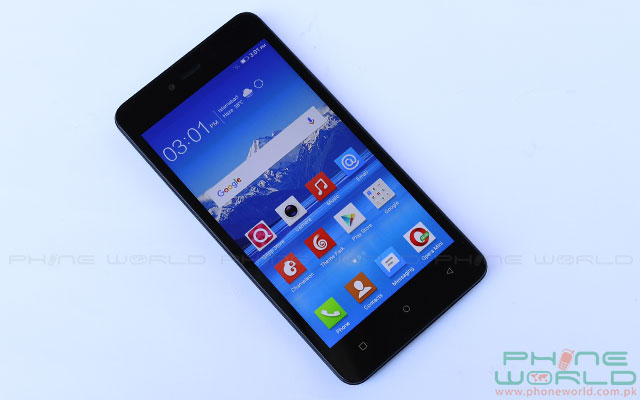 The design and body structure hasn’t witnessed any changes except the dimensions have been changed by few mm. the whole body and frame is made of polycarbonate plastic –Design language is same as Noir w80. The display placement, the back cover, the buttons placement each and every thing is just a clone of QMobile Noir W80.

On the front side, 4.0 FWVGA IPS display whose screen to body ratio is 50.5 %, it reveals that it has bigger body than screen which is just 4 inch. The upper front area has oval cutout for earpiece, 2MP front camera along with couple of essential sensors. The capacitive function keys are appeared outside the screen.

The edges has important role play with 10mm thickness. Top edge is home to audio jack, while the right side carries volume rocker and power key. Beside on right side, microUSB port 2.0 is placed.

QMobile Noir W70 comes with 1 GB RAM and 8 GB ROM on board. The main memory is 1GB that can accommodate almost 2 to 3 Apps at but more than 3 Apps will surely put strain on it. The internal memory is 8 GB that gives you 4.5 GB usable storage space out of total space. You would must need external memory (Micro-SD card) to expand the storage.

QMobile Noir W70 is flourished with 5 MP rear camera with LED flash and 2MP front camera for selfie. The camera App launches quickly and focuses the objects within a second, however touch focus feature is also available.

Noir W70 sports 5 MP on the back along with LED are popped up from cutouts. The camera captures photo with 2560 x 1920 Resolution. The picture quality is good well, very good –must say. The colors look natural, slightly tint –that’s good for quality. The camera can make HD video as well. Noir W70 is pre-loaded with bunch of mode that are Face Beauty, Filters, HDR, Panorama, PicNote, Scan, GIF. The GIF and scan two new and innovative features that have been provided for user.

Noir W70 features 2MP shooter at the front with 1600 x 1200 resolution. The camera result is fairly good for being a mid-range device. The front camera provides Face Beauty feature that allows to apply different kind of functions to make the face attractive and vivid.

QMobile Noir W70 is packed with proper connectivity suits, it supports 3G connectivity for dual SIM and both the SIM slots get micro SIMs.

For wireless connectivity it communicates over Wi-Fi 802.11 b/g/n, Wi-Fi direct, hotspot, Bluetooth 4.0. In addition it has GPS and FM Radio.

The physical connectivity on board is 3.5 mm audio jack and microUSB port 2.0 for charging and data transferring.

Noir W70 is shipped with 1850mAh removable battery. The takes time to charge and get down rapidly while using 3G services like video streaming, internet browsing. It works for 5 to 6 hours on consecutive use of 3G service. However, when it comes to GSM network like making call on GSM network, Messaging –the battery may provide 10 hour backup.

QMobile Noir has employed Android 5.1 Lollipop for management of Noir W70 while it’s been skinned Amigo 3.1 UI. The Amigo 3.1 has almost same interface as Android yet it has an interesting feature known as Chameleon. As Chameleon is name of an animal which adopt the color of surrounding –the Apps has actually the same job to do. It picks up two color and prepares a theme for you.

QMobile Noir W70 has Quad-core chipset, the Media Tek chip have been benchmarked with Antutu to conclude the optimal performance. The smartphone has shown positive response with 23K points –It has performed above the expectation as it has lower specs but thanks to each single with 1.3GHz clock rate.