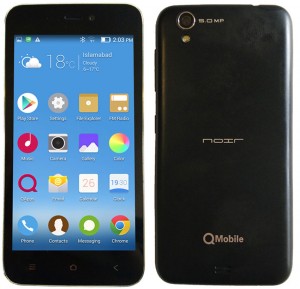 QMobile Noir X350 Review will guide you through almost all phases that includes specification, power, better and best, cons, images and powerful review about the power and bench marking of the above mentioned smartphone.

The look is almost the same as do other QMobiles have with rounded shape smoothly curved at the corners and with no sharp and blind edges.

The grip is firm in the sole of hand and looks easy and nice and the grip is further increased when handled in hand.

The interface is attractive and user friendly and user can be used to it in no time. The keyboard for typing message and the dial pad for dialing one’s number is the general and typical ones that most of the QMobile smartphones do use with a light greenish color for the buttons and other interfaces.

(QMobile Noir X350 comes in the mid-end category and scoring about 20 thousand points with Antutu proves that the device is best in its row.)

Testing with Qualcomm’s testing application that checks for the Browser’s performance along with Single core and Multi-core individually, the performance for QMobile Noir X350 Review were efficient enough to tell the customers, to go to the market place and grab your Noir X350 at once.

Now comparing the results of Browser, Multi-core and Single-Core of QMobile Noir X350 with that of Samsung Galaxy S3.

The GPU or so called the Graphical Processing Unit of Qmobile Noir X350 is also at its best with 14,349 points with the GPU Bench Marking, thus proving itself to be one of the best smartphones in the mid-end smartphones.

With sleek shape and cool look with a metallic extra ring cover for its Physical strength and 1GB Ram, 8GB Rom and a Quad-core processor with 1.3 GHz speed along with an efficient and powerful GPU deserves to be a set of choice for people that can afford a device for as low as Rs:13000/=.