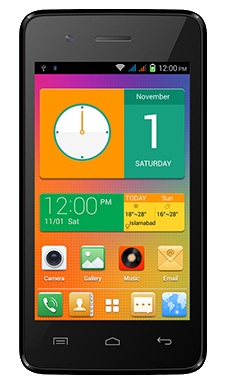 QMobile has launched an extension to the previous QMobile X6. Thus changing the name from X6 to noir X6 with full touch screen and with much more features with android Kitkat 4.4.2. It is very light in weight and can easily be gripped in hand. Its plastic covering with good finishing is the main reason that it can be handled with confort. It is dual sim and both sim modules may work at the same time. Although the internal memory is very low i,e about 150 MegaBytes, yet it is supported by extending it with a memory stick with micro SD card by just removing the external plastic cover without being restarted. It consists of 4 inches WVGA LCD Display and 1300 mAh battery that runs for long time as the consumption related to other smartphones is very low because of its low resources which may be a reason of unsatisfaction among the customers and specially the ones that are games and graphics lovers.

It has 1.3 GHz Dual Core processor and 512 MB ROM and 256 MB RAM. Camera with 4X zooming ability isn’t that good but it has an LED flash for enhancement and this can also be used at night for glow with the built in app (FlashLight). Other apps consists of Gmail, Google Maps, Browser, calculator. Also contains an FM radio with bandwidth from 89.0 to 108 and a much attractive feature is that it can record from the live stream as well.

QMobile noir X6 Review is about the specifications, cons and pros and technical review about QMobile Noir X6.

QMobile noir X6 can be a set of choice for the people that can not afford expensive devices and yet they want smartphones with little payment.

The internal features and the templates used are quite attractive and adorable as shown in the following snaps. The phone dialler and keyboard have used as the standard ones and the template has been changed to blue that looks nice.

We know that we can not test a device with low processor and little memory, so we can not take a decision for a device and its rank. But we still can have a general view that the device can be used for incoming and outgoing calls and for playing simple mpg and MP4 movies and so on. It would support 2G as 3G would be difficult for it as the memory will soon come to the full and you may not surf the net well. You may not run good games with graphics.