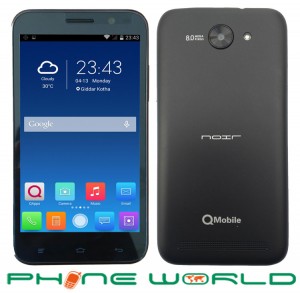 QMobile is best in completing every individual’s suggestion and taking rapid answers to the questions in the form of devices with variations. This becomes the main reason for the customers, not to port to other company for his/her customized thoughts in selecting the device of his/her choice. In short, QMobile doesn’t leave any holes for the customers to squeeze in to other device of any other smartphones manufacturing company.

The device has a smooth sensation once gripped in the sole with its flat and sleek shape. It has nicely molded and well rounded boundaries that surely are not gonna make you feel bore and boredom you as it is a light weighted smartphone device with perfectly polished and heart touching shape. You will feel good while surfing the internet you may spend hours without even knowing because you are holding a fast and top category smartphone in your hands.

Nearly all QMobile smartphones have been shaped in a simple style and users may review them to be the same. QMobile Noir X600 is also a device with some basic look just as the others yet the internal schema is totally different and latest with fast processor, huge memory and huge storing secondary memory.

The details have been mentioned in the snaps below.

The Interface has been the general interface as do most of the QMobile have. The default interface is decorated with nice and square shaped icons with nice shades and matching colors.

The only flaw in the device is its battery that is 1800 mAh and for an Octa-core processor with 2GB RAM a minimum of 2300 mAh battery would be sufficient and may last for a day. We hope that battery shouldn’t be compromised with weight of a smartphone.

The key-pad and keyboard both have been used the typical and standard ones with blueish color for the number buttons.

The above mentioned words might have hurt you. Here are the heart touching news from our QMobile Noir X600 Review side.

Taken 31,129 points with Antutu, it takes QMobile Noir X600 to the High-end smartphones. Although it may not compete with the international and leading smartphones, yet here we can compromise with the price of a smartphone like QMobile Noir X600 with just Rs:18,000/= and that of others leading phones with price above Rs:50,000/=. The aggregated performance of Noir X600 is better than that of HTC One which is an achievement.

Some people take interest in matching a device with a standard device, that is famous throughout the world or at least is an international smartphone. Here We have matched QMobile Noir X600 with HTC One. The results are in the snapshots below.

Scores above 10000 with GPU bench marking tool is better enough to perform graphics with fluency and control. QMobile Noir X600 Review shows that the device has taken 14,573 points with GPU Bench Marking tool that shows the control of QMobile Noir X600 over the graphics. The frames are flowing one after the other in a row with such a great speed that the user won’t get any break in the moving objects over the screen.

Hay buddies, don’t get confused with the images below and don’t say that these might have been taken from PC. This is a perfect game with adorable graphics and heart touching controls. But this is just nothing for the device having (1.7 * 8) cores, as the tasks divided by 8 cores may not be more than small chunks and they can execute them with no time delay. The 2GB huge memory is great enough to keep all the game and its levels inside the main memory with ease and efficiency.

QMobile Noir X600 has a modest processor that is over bearing that can crunch the task been assigned to it. The 2GB RAM is a huge tank of memory for storing large amount of data that includes apps, OS, audio/videos and can provide huge buffers in the internet that will make smooth operations and punch better performance.