QMobile introduces QMobile Noir X75 with elegant design having average specs. Noir X75 has premium design and efficient hardware that will keep you connects to the world with fast 3G connectivity. In QMobile Noir X75 review, we will discuss all the aspects of smartphone including pros and cons. All the fun begins with 4.5” FWVGA wide screen with smooth touch. The sufficient 1.3 GHz Quad core processor working with 1 GB RAM that switch apps without any lags. The internal storage is 16 GB and can be expanded upto 32 GB. All the operations of QMobile Noir X75 are controlled by Android 5.1 Lollipop, -supports multitasking. Back and front cameras are said to be 5 MP AF with LED flash and VGA respectively. The battery inside QMobile Noir X75 is 2000 mAh. The price of QMobile Noir X75 is Rs.7, 250 in Pakistan. The device with all the above mentioned specs is reasonable and affordable in give price Tag.

QMobile is boxed with hands free, data cable and 1amp travel charger. The provided hands free is of a good quality. The travel charge is 1amp and promises to charge your mobile in quickly. 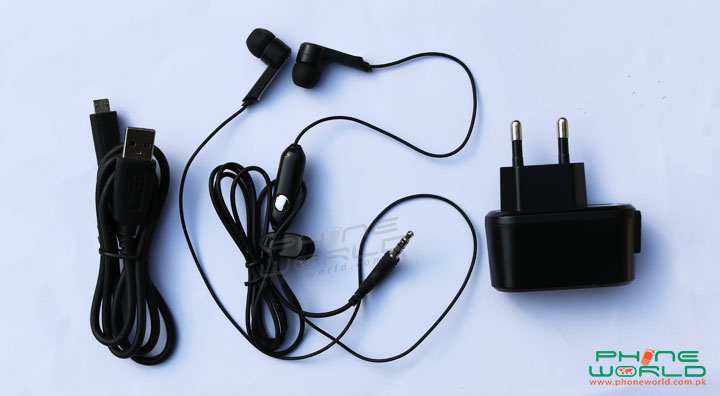 The specifications that are mentioned below are 100% authentic, while the price may vary market to market.

The design of QMobile Noir X75 is simple and sober, QMobile usually launches mid-level smartphone with plastic frames.it has 4.5” FWVGA display on the front. The dimensions of QMobile Noir X75 are (132 x 66 x 11) mm and weighs 157 grams, although the length and width are perfect to carry in hand but the thickness and weight is an issue. The side are furnished with white ribbon that runs around the four sides of smartphone. 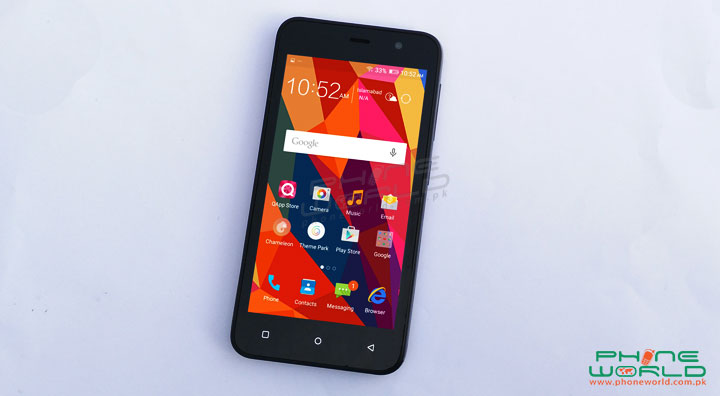 The display of QMobile Noir X75 is featured with 4.5” FWVGA having pretty decent 240 dpi. The display resolution is (480 x 856) pixels that reduces the viewing issues from different angles. The touch sense of smartphone is smooth and themes gives good view to eyes. The display looks colorful, prominent and attractive.

The top side of QMobile Noir X75 is a house to audio jack, the power key and volume rocker are place on right side, as the smartphone is 132 mm taller so you can easily access the physical buttons with right thumb. MicroUSB port is housed at the bottom side.

The top side of QMobile Noir X75 is a house to audio jack, the power key and volume rocker are place on right side, as the smartphone is 132 mm taller so you can easily access the physical buttons with right thumb. MicroUSB port is housed at the bottom side.

The QMobile Noir X75 has ear speaker and front camera on upper portion of front and the proximity sensor also lies there. The lower side of the front has navigation keys that are appeared outside of the touch screen and has not LED lights.

Since we have mentioned in the intro, QMobile Noir X75 is packed with 1.3 GHz Quad core processor, chipset model is MediaTek MT6580M. The processor is capable of handling 2, 3 apps. This processor inside the QMobile is average performing and often use in the smartphones with the price range of PRs: 10,000-/. The processor is integrated with Mali-400MP GPU that controls all the graphics of smartphone.

The memory section of QMobile noir x75, it comes with 1 GB and 16 GB ROM, while internal memory is expandable upto 32 GB with MicroSD card. The 1 GB RAM in the smartphone may run 2 3 apps a time.

QMobile Noir X75 is furnished with 5 MP rear camera along with LED flash and front is carrying VGA camera for selfie. The camera app is provided with essential settings options that let you play with both cameras. There is bunch of settings option available in camera app like image quality and video quality setting option likewise Geo-tagging, countdown, capture mode front mirror, anti-banding etc. 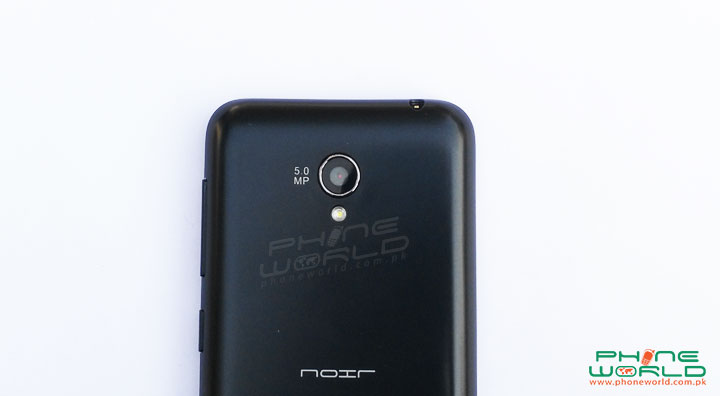 The rear camera of the QMobile Noir X75 is 5MP with LED flash. The actual resolution of lens is 2560 x 1920 pixels with 4:3 ratio; however you can set your required resolution from settings.  The camera have certain pre-defined mode that you can use like Face beauty, filter, HDR, Panorama and PicNote. Further the camera can make HD video with 720p resolution.

Front camera of QMobile Noir X75 is VGA selfie shooter.the image resolution of the front cam is 640 x 480 pixels, the images captured with front camera has shared with you.

Since QMobile Noir X75 is powered with 2000 mAh, it is removable in case of inserting SIMs. The 2000 mAh is enough to for 480p capacitive touch screen, it can keep the smartphone alive for whole day long on average usage of 3G service, still it goes down rapidly on frequent use of 3G calls or data browsing, however battery takes time to charge as it comes with 1amp charger.

Interface of QMobile Noir X75 is user friendly, no such big is seen in interface yet the quick setting will be appeared on the screen by swiping down.The Home screen splashes with some pre-installed apps and Google search bar; there is no such menu button that leads to install app, all the installed app appear on home screen slides. Notification area has notice management for app.

The messaging app has QWERTY keypad the keys have enough area on screen that you easily press the virtual keys without touching the other key. The chameleon app is new and interesting feature added to QMobile Noir X75; it uses the camera to pick two colors from area captured by the camera and makes the theme for you. There is a theme app having multiple themes that you can apply.

The score of QMobile Noir X75 is average that we normally expect from mid-level smartphones with average performing processor. The multicore test score is 1169. In metal test (single core), it got 818, we can say it good enough performance and the browser test score is impressive as it got 1745 points. 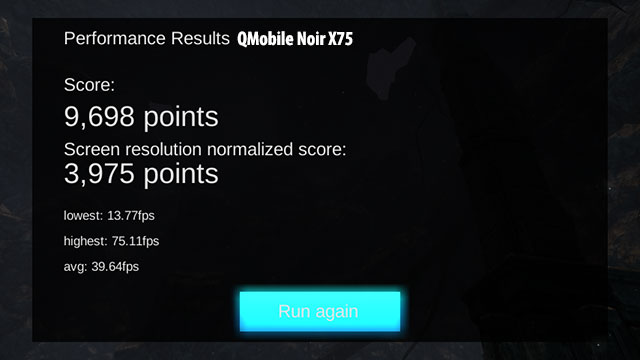 QMobile Noir X75 has 1.3 GHz Quad core processor, 1 GB RAM and 16 GB ROM and this is a good combination. The smartphones with the specs mentioned above are always reliable and have better performance in the mid-range smartphones. A smartphone with price of Rs. 7, 250-/ with such great specs and latest OS Lollipop 5.1 is an affordable device at good price.