Display is the initial door of acceptance among the customers. Many a customers are inclined towards the display of a smartphone. QMobile Noir X800 Review is of the mark that the Noir X800 is been fitted with graphics driver normally used with the Mediatech MT processors. The renderer is Mali-450 MP with GPU version of OpenGL ES 2.0. The resolutions of the screen are 720*1280 pixels with 320 dpi that runs HD movies and high resolution games with ease using its 1.4GHz Octa core processor that are very fast to run almost any games and apps. The display is IPS LCD multi-touch with 16 million colors that can support up to 10 fingers consecutively for performing ten different instructions at a time.

In the image below, a point that needs to be mentioned is the wide capturing ability of the camera. If you look at the screen of the device. You will come to know that Noir X800 captures a wide area in its focus as shown in our QMobile Noir X800 Review.

QMobile Noir X800 Review shows the processor to be 1.4GHz Octacore with 8 cores of 32-bit type that vary between 728~1365MHz speed. The chip-set model is MT6592(MediaTech) which is relatively cheaper to Qualcomm’s processor. QMobile use mostly MediaTech processors that make them sell the devices at low costs.

As mentioned earlier in the first paragraph that QMobile Noir X800 comes in two categories. One with 1GB RAM and 8GB ROM and 8MP Rear Camera, all at a price of 16,500 PKR and the other with 2GB RAM, 16GB ROM and 13MP Rear Camera with a price of 20,500 PKR. Our Noir X800 has 1GB RAM and 8GB ROM with 8MP Camera. The device also has a total swap of 512 MB that can boost the device’s memory and work like if it has a total of 1.5 GB RAM. There is also a supporting slot of 32 GB MMC that can be introduced from the user’s end with the amount of data he/she stores in.

QMobile Noir X800 has an ordinary hands free with open ear pieces. A 1amp charger that can charge your device at a fast rate. A USB Cable that can be used for data exchange as well as for plugging in the charger for charging. A pin is also send within the box to insert the SIM and memory card in the SIM jacks. The battery is fixed and is not removable and not replaceable. These kinds of smartphones have SIM jackets that are pushed back with that pin(provided). The box also contains a manual along with DIGICOM warranty and you can claim your warranty with in a year with no fear if your smartphone is damaged.

Comparison of QMobile Noir X800 with iPhone 6 in shape:

QMobile Noir X800 has been matched with iPhone-6 due to its similar shape accordingly. It has a sharp edge at its border on both sides that has both a Pro and a Cons discussed below. 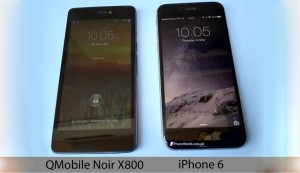 Camera is another of the customers interest these days and users rush towards a smartphone with better camera. QMobile Noir X800 has a Rear camera with 8MP power that captures images with over 3264*2448 pixels and with a picture size of about 2.36 MB. The features contain self timer, face detection, continuous shots, picture size, preview size, auto focus and touch focus. The most important of which is the continuous shot that takes consecutive 40 or 90 shots in a row.

In the video mode, it also captures videos at HD with 720*1280 pixels. A demo video was captured that captured 9.97MB space with in 11 seconds in HD capture mode. The snapshots below show the features in pictures mode, the 40 continuous shots taken consecutively and the features for Video.

The image below is taken with the rear camera in its High Definition mode. The size came out to be 2.36 MB and the dimensions came out to be 3264*3448 pixels. (Image has been re-sized for the web). 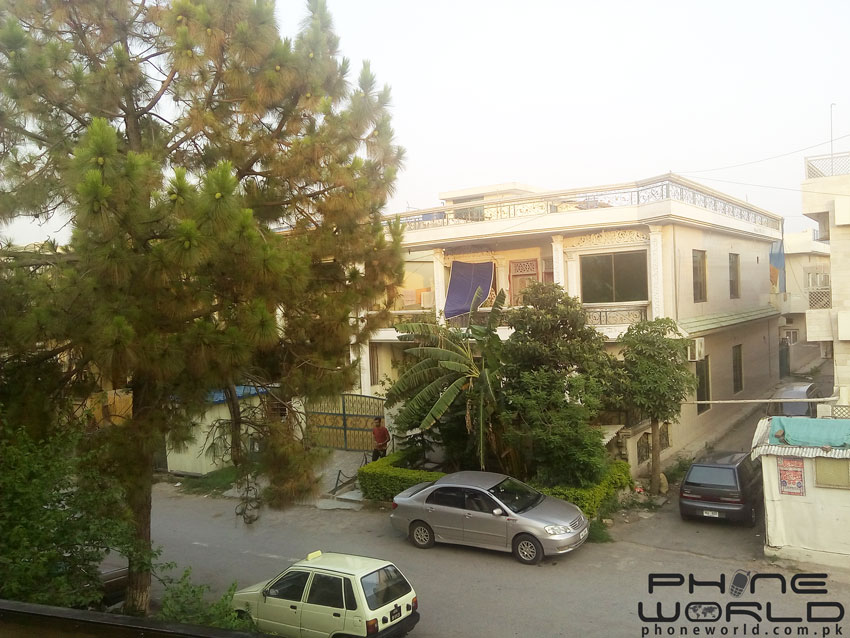 The image below is taken with the front camera in its full mode. The size came out to be 1.27 MB and the dimensions were 2560*1920 pixels. (Image has been re-sized for the web). 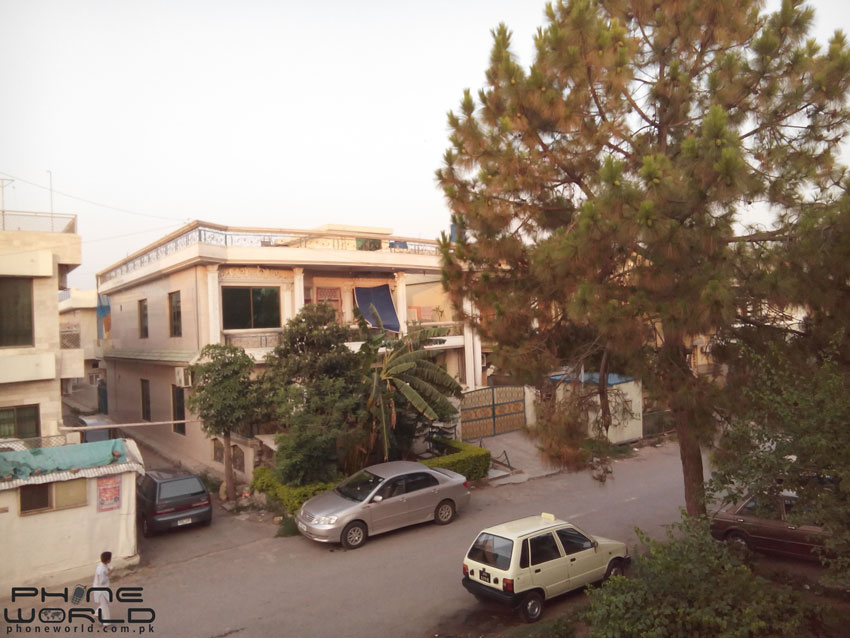 The iPhonic structure of the Noir X800 is heart touching with its compactness and sober well look. The device can easily be grabbed in your hand with the thumb free to touch any corner of the screen with ease.

The SIMs can be introduced from the sides with its pin. SIM-1 can handle just one SIM with 3G bands enabled and you can surf better and fast internet. The SIM-2 is used to handle both Micro SIM and a Micro SD-Card at once.

The internal interface has a fair brownish color that feels awesome with its faded colors inside each other. The IPS LCD multi-touch display also increases its beauty and exaggerates its look and beauty. The touch is quite soft with up to ten instructions can be feeded to the smartphone with its screen at once using your fingers.

Following are the features and tools along with the battery interface that QMobile Noir X800 offers to us. The flip-bird is one of the main features that is a quick glance book that can be set by the user according to his/her interests. The battery snapshot below shows the battery that is consumed to be about 20% in the testing procedure after it was fully charged. That is the main flaw as we have discussed before that the battery size and capacity have been compromised with the shape and design of the device. The battery may work for almost a day with its normal use.

Touch and Type and Storage inside QMobile Noir X800 Review:

The touch pad and keyboard have been used the standards and typical with green interface and grey color that throws no boredom upon its users in their daily use. The last snapshot shows the phone storage and the memory available and the memory captured by different media and apps.

An Octa core processor is expected to be with its best with Antutu and QMobile Noir X800 does the same thing. Taking score of about 28 thousands takes the mobile to the beginnings of the high end smartphones. This much rank takes QMobile Noir X800 higher than the international smartphones like Asus Zenfone 5 and Xiaomi MI 2 and others of this group.

Vellamo is a bench marking application that checks the performance of browser, single core and multi core of a smartphone. As Noir X800 has an Octacore processor with 8 cores and 1.4GHz speed. The rank is high enough to take down a lot many devices. Noir X800 has been tested with two international brands i-e HTC One and Samsung Galaxy S3. The points are shown pictorially below in our QMobile Noir X800 Review.

Browser’s Comparison of Noir X800 with HTC One & Samsung S3:

After checking the device with Vellamo for its performance in the browser. The results revealed that our QMobile Noir X800 is better than both HTC One and Samsung Galaxy S3.

The performance for both single and multi cores are checked in different interfaces with different tests. Both are discussed in detail below and are bench-marked.

In the single core performance, the Noir X800 took 752 marks which are better than Samsung Galaxy S3, yet are a less than HTC One with a big margin.

Same is the case here in QMobile Noir X800 Review. Our X800 took 1278 points with its 8 cores which are greater than the points taken by the quadcore processor of Samsung Galaxy S3 and less than the multicore processor of HTC One with a little margin. The points are shown pictorially in the snapshots below.

After testing our Noir X800 with a graphical processing unit testing application, the points for our device came out to be 802 in T-Rex which are almost equal to the score of Samsung SM G-730 and Huawei P6.

Checking the device with four different games with different requirements and graphics. The performance and speed were smooth and fast. Enjoyed a lot of games for long time. Although the battery performance was a little dizzy though. The loading time for games was low and performance quite good. Octacore processor has a flaw that the device gets heat with its use for a long time that reduces the battery timings as well as explained in QMobile Noir X800 Review.

The display of Noir X800 is 720*1280 pixels that is efficient enough to play HD movies and better games with its Octa-Core processor that tackles with heavy tasks by dividing them in to chunks. The chunks are then fed to the 8 Cores to tackle with them accordingly. The look is almost similar to iPhone 4. The sharp edges at the corners at both the front as well as the back side at the boundaries is a protection that protects the display and back glassy cover from scratches. The camera is also fed with features like taking 40 snaps or 90 snaps at a time. Just by long clicking the capture button, You can have multiple images with a single click, almost 40 in about 3 seconds. Battery is an issue that needs to be more than that because 2000 mAh won’t run to the extent that is required to be. Price of nearly all QMobiles are quite affordable. An international smartphone with such specs and features will cost almost double and QMobile Noir X800 is just Rs:16,500.