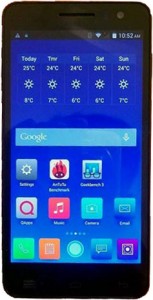 While moving through its stages, QMobile has launched another smartphone that consists of many smart features with fast Octa-core processor embedded inside. QMobile noir X900 Low Review will try to cover all the pros and cons of device along with screenshots. Its 5 inches display and beautiful shape makes it attractive and look better than any other smart phone of its siblings. Having an Octacore processor of ARM technology with Id: MT6592 @ 1.36 GHz, that helps it to perform swiftly and run smooth in high resolution games and graphics and perform many logical operations in no time. It consists of 8 megapixels camera that can take high resolution images and video with HD graphics. It also consists of front camera with 2 megapixels that works fine enough for skype and other social media video chats. With latest version of Android OS ( kitkat 4.4.2 ) installed, QMobile noir x900 uses all the resources and latest technologies very well that may not be possible in previous versions and devices otherwise.

The gallery has been modified to provide an attractive look to the users in many aspects and give them an ease to use this smartphone. The dialer and the message keyboard have been used as the standard ones for dialing and creating text messages yet there have been made certain changes that could benefit the users to use their smartphones with ease like in the menu and in the gallery. Another change that has been made in the menu section is that the smart phone has been aggregated with built in apps for Facebook, Skype, twitter, whats-app etc etc.

The gallery has also been embedded with some good stuff like File-board that gives you easy access to sports, science, news etc in a single click.

While checking the performance through many apps, the overall result was very good with respect to many other smart phones. The results are as under.

Antutu is a powerfull app that is used to check the overall performance of a device, that includes Processor, RAM, Rom, Graphics and all other features. The results are shown in the following snaps. 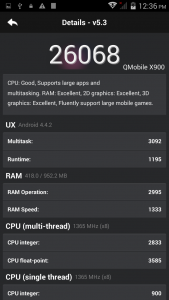 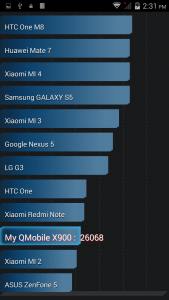 This snap shows the comparison of QMobile x900 with other devices. Although, it isn’t better than HTC and Samsung, yet it has a good control over the other smart phones. 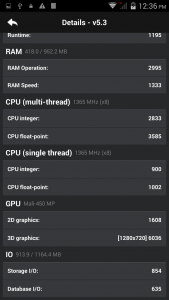 This snap is all about the overall performance of the device that shows the RAM, CPU both (single as well as the multi-thread), GPU, IO.

Checking the device with Geek bench3, that shows the system information of the device along with the rankings of its core either individually or in groups. Geek bench shows the model, its operation system, name, id as well as manufacturer of the smartphone. 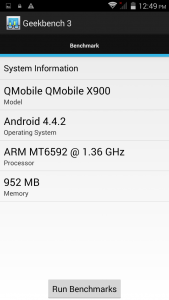 This device is running along with an octacore preocessor with the name as mentioned in the snapshot i.e ARM MT6592 @ 1.36 GHz. With the help of this octacore technology, it enables the smartphone to drive the games and HD graphics fluently and smoothly with good speed.

The GFX Bench application is used to show the video strength, graphics, display and functionality of the device in Gamings and other graphics accelerated apps. The results are shown in the snaps below:

A smartphone that has resultant score of 20 thousands or more than that with Antutu for processor, RAM and Input/Output and score more than 2 thousands in the graphics with GFX Bench mark for Graphics can be so called a better smartphone that won’t halt in multi-processes and won’t make the users bore while playing graphical games and HD movies.