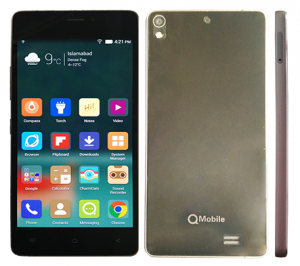 QMobile has launched the first most sleek smartphone device of its kind with the best specs among its competitors with a cool name as QMobile Noir z7. Powered with an Octa-core processor, the 1.7 GHz model number (MTK MT 6592) raises its rank above any other QMobile in its hierarchy.

QMobile Noir z7 Review, where you will be entertained and amused with covering all the aspects of the newly launched smartphone.

I observed QMobile Noir z7 to be a competitive device till the time I was not to the camera. The rear camera has been told to be 8 Mega Pixels but it is not even better than a simple and basic VGA camera and its blurriness sprinkled cold water over my attraction towards the device in which I was personally taking interest. Don’t know whether it is a Gossip or there is some technical issue in the device’s camera that I got. Even the front camera was performing better than the rear one.

(Updated: The device that I got was having some technical issue and the auto focus was not working properly. So the smartphone has 8MP camera that works properly.)

The second thing was, that the battery was shown to be 2050 mAh and the weight of whole device was not more than a battery with so called 2050 mAh. Other thing was the performance of battery was not that much good as can be expected from a device with 2050 mAh battery.

The interface of the overall noir z7 is the same as that of other smartphones of QMobile. The touch is relatively smoother and efficient in focusing the exact pixels over the screen than the other QMobiles launched before. The speed, memory and storage are faster, better and higher.

Antutu is benchmark that checks all aspects of a device, including UX, GPU, RAM, I/O and more just with a single click. Each item is individually assessed and given a score. The scores for QMobile noir z7 are clear from the snaps below.

Vellamo is a bench marking application that checks the performance of a device’s browser, multi-core and single core along with the integration and performance and intercommunication between them with a single go. The results can be checked below with comparison of some the world’s best smartphones.

The overall rankings in relation to some other smartphones are shown in the graph for a single and resultant graph.

3D Mark is s special type of bench marking free application that is used to check the performance of the video graphics accelerator VGA chip of a smartphone. QMobile noir z7 scored 4968 on the board, which is very good because this much of power can run high definition games, videos very fluently without any utterance.

QMobile Noir Z7 is a smartphone with smart features.