Passing through every hurdle and making things possible, QMobile is not going to pull back, yet its gonna win its customers with frequent successors. In short, smartphones are flowing for QMobile that will make you QMOBILED. QMobile Noir Z8 Plus Review is one of the many beads of its discussions.

QMobile Noir Z8 Plus is a challenging successor of QMobile Noir Z8, discussed in our previous review. By giving a very tough time to nearly all the competitors in the market. QMobile Noir Z8 was leaded with all the major major components that a user expects in a smartphone. The main reason for its acceptance was not only the media like (Jakclien Fernandez) that created a magnetic effect of attraction among the customers to pull over towards the Noir Z8 smartphone. But indeed the reason was its pros, pros and pros (except a few that have been covered in this device). 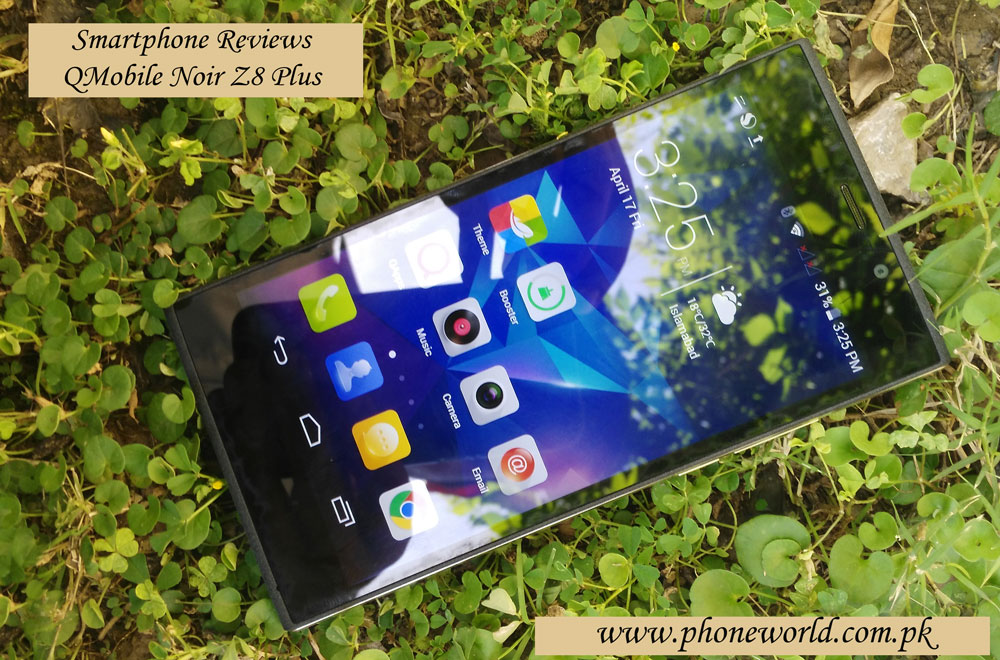 The external look of the device is almost the same as that of QMobile Noir Z8 with a little change in the size, which is 5.5″ in Z8 Plus which was 5″ in Z8. The rest of the shape, look and design are the same exact things. As we are discussing the external features, so there is a must need to mention the battery. The battery in Noir Z8 was not removable and we have written this point in the CONS section in our previous Review about QMobile Noir Z8 Review. This thing has been modified in the recent QMobile Noir Z8 Plus. The shape looks nice with its firm grip and sandstone back cover. The two metallic colored rigid bars at the sides supports the device and gives it an attractive and decent look just like the Noir Z8.

When looked from the back while the back cover is removed, you will notice that all the necessary jackets are assembled in a row. The jacket under the rear camera is for MicroSD card that can extend memory up to 32 GB. The next jacket is for SIM-1 for 4G LTE and the proceeding one is for GSM followed by the power receiving jacket.

One unique feature about the device is the ultra slim shape of the device that looks real nice and can be putted in the pocket without any burden and feel of discomfort.

Just like the display of the QMobile Noir Z8 Plus is concerned with its IPS HD AMOLED colored display, similar the interfaces and the icons that are heart touching and attractive. The browser is also not less than the super iconic interfaces with wonderful wallpapers and squared icons. It is fast and smooth with its touch accompanied by its well furnished interface that leaves no flaw.

The interfaces for both dialer to dial a number and the interface for writing a short message to your friends and family are being used as the generic and standard ones. Keeping in mind that these interfaces are generally used and are user friendly.

Battery is the most frequently asked question by the customers and most of the time, they ask questions like, for how much time does the battery provides backup ? What is the capacity of the battery ? and so on and so forth. This deficiency has been removed in QMobile Noir Z8 Plus by introducing a 2820 mAH battery with replaceable option. The OS has also been customized with a software of QUALCOMM, the so called Snapdragon Batteryguru that keeps your smartphone smart by optimization and killing the tasks, releasing memory and keeping the flow in the flow.

Bench marking was an important task to check for the newly features, specs and change in shape and display being made in QMobile Noir Z8 Plus. Its surprisingly the same old smartphone Z8 in processor, RAM, ROM, Display, GPU(Graphics Processing Unit) and others specs. There are two main changes as discussed and those changes are the size of display and 2820 mAH replaceable battery.

With 1.2 GHz Quad-core processor of QUALCOMM SNAPDRAGON-410 with ARM Cortex-A53 chip set, we can expect good results in relation to performance. As both QMobile Noir Z8 & QMobile Noir Z8 Plus have the same structured processor so are the results quite similar in between the devices. Both got an average of over 21,000 points with Antutu.

Comparing the results of QMobile Noir Z8 Plus with international branded smartphones including Motorolla & HTC One, we can obtain the following results & you may easily distinguish the better one with low price and good results.

The results been taken after checking the device with GPU(Graphical Processing Unit) Bench marking tool. QMobile Noir Z8 Plus took over 12,500 points, that are efficient enough to run HD Graphics, better games and apps over its 5.5″ Super AMOLED IPS Display. Another thing is the screen resolution normalized score which is above 10,000 proving resolution-to-screen ratio to be at its best.

I love racing games if the display of the device is perfect and the GPU is better enough to run smooth frames of graphics at a better speed. Playing racing games with QMobile Noir Z8 Plus with its IPS AMOLED large screen is fun.

For a smartphone with a Quadcore (Qualcomm Snapdragon410) processor and with super AMOLED HD Display of 5.5″ along with 2GB RAM “GAMES ARE NOT AN ISSUE”.

When ever there are successors of any device/appliance, the idea directly stuck our mind that the cons in the previous might have been removed in the newly launched device. There were two main things that users did put finger upon in the prior smartphone QMobile Noir Z8.