QMobile one of the largest smartphone brand in Pakistan has taken initiative to support sports in country. The company has always remained prominent in sports specially cricket at International level for Pakistan. QMobile & PTA Collaborated to Host 1st Telecom Cup.

This is the first time that PTA has shown interest to support cricket at national level. On the launch of 1st Telecom Cup, QMobile is offering its tribute to Pakistan’s legendary Test Skipper Misbah ul Haq.

1st telecom cup is sponsored by Islamabad United and other industry leaders such as Hypernym, PathFinder Group, KEENU, HYFENTER, FM91 and PTV Sports. 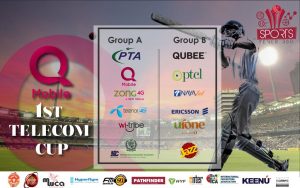 It is evident from Social media campaigns of QMobile that they love cricket and want it to prosper. Farewell to 1st test skipper and launch ceremony of 1st telecom cup is a very initiative on by QMobile. We should give tribute to such devoted players like Misba-ul-Huq who made Pakistan proud.

For more information regarding 1st Telecom Cup you can visit official websites of QMobile and Sports Fever 360.