As we all know “3310” is that common mobile word about which every person knows. After a massive recognition of this term now QMobile has decided to use these letters for their brand new feature phone “Q3310”. This a latest feature phone launched by QMobile to beat the market of Nokia 3310. Price of Q3310 is PKR.1999/-. Let’s check the Q3310 Review. 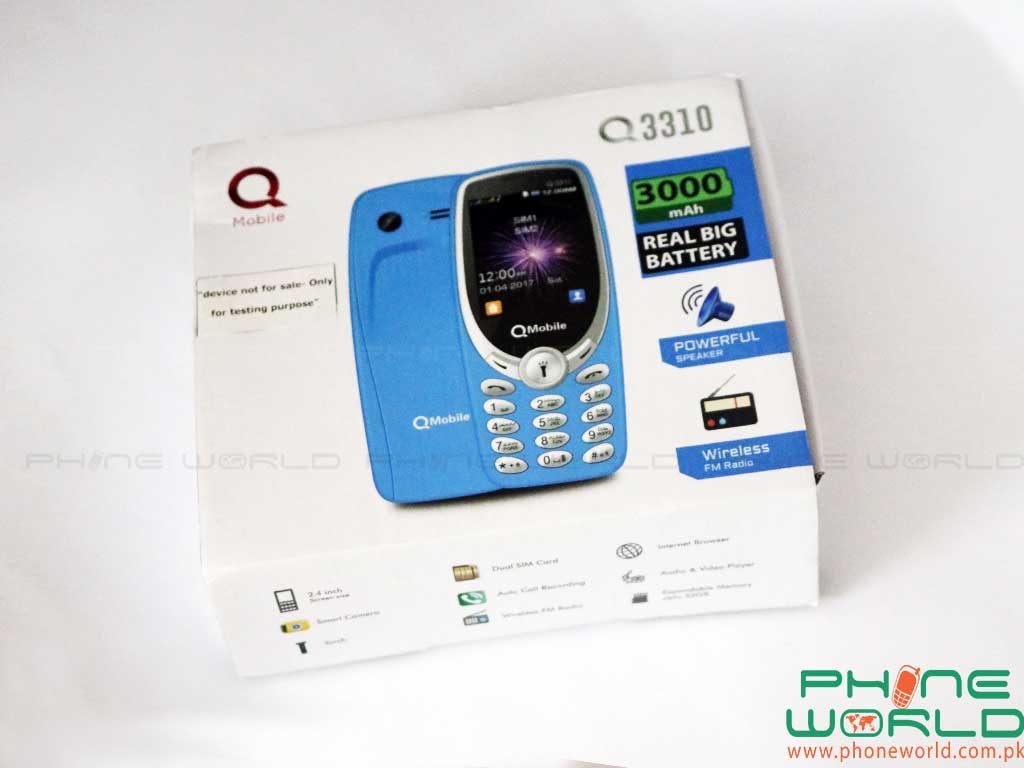 Q3310 is a competitor of Nokia 3310 but the biggest difference between these both devices is Battery. Nokia 3310 has 1200 mAh battery while Q3310 has 3000 mAh battery, big battery is a main plus point in feature phone which Nokia is lacking.

Price and Specifications of Q3310:

The body dimensions of Q3310 are 124.6 x 51.3 x 13.4 mm while the weight is only 117 grams. As compare to other feature phones its weight is little heavy. It contains 3000 mAh big removable li-ion battery inside its removable back cover.

The screen size is 2.4 inches’ while the screen to body ratio is 28.2%. It supports 320 x 240 pixels resolution display. All keys are present on the main front side. Main function keys are also present at the front side.

Edges are almost simple because it is not a smart phone. Top edge has torch light while down side has microUSB port version 2.0 and audio jack of 3.5mm. Back Body has smart camera lens without LED flash light and speakers are also present on back side.

Q3310 is not a smart phone so we cannot expect any brilliant feature in camera or memory section. It is just a feature phone. It has smart back camera lens without LED flash light which is giving us satisfactory results.

We can increase its internal memory up to 32GB with the help of memory card. We can insert memory card in separate slot rather than SIM slot.

It is just a 2G feature phone moreover it doesn’t have Wi-Fi connectivity. Bluetooth is available in QMobile Q3310 and its version is 3.0 furthermore radio is also present in it.

Q3310 is a competitor of legendary phone Nokia 3310(2017) but QMobile has improved some features in Q3310. Q3310 has bigger battery than Nokia device and users look for big battery phone in feature phones category. QMobile can attract market towards Q3310 because of its bigger battery feature.