Here we go, introducing the outstanding device launched by QMobile recently. QMobile S15 got a bold entry in the world of smartphones with tremendous features and elegant looks. This device really got the attention of all the smartphone lovers with its upgraded features. So let’s discuss the specifications and features in detail because I am so excited and unable to stop myself anymore from sharing it with all of you. Let’s check QMobile S15 Review.

The most interesting thing about QMobile S15 as I found is its camera with good quality. Keeping in view of selfie trends in Pakistan they have improved the front shooter for a selfie to the 5MP lens. On another side, back camera has an 8MP lens with LED flashlight. It comes with a good memory of 3GB RAM and 16GB ROM, which is expandable up to 64GB. 5.2 inches’ of screen display makes you delighted with 1.5GHz Quad-Core moreover it runs an Android version of 7.0 (Nougat). QMobile S15 has a reasonable battery of 3000mAh. 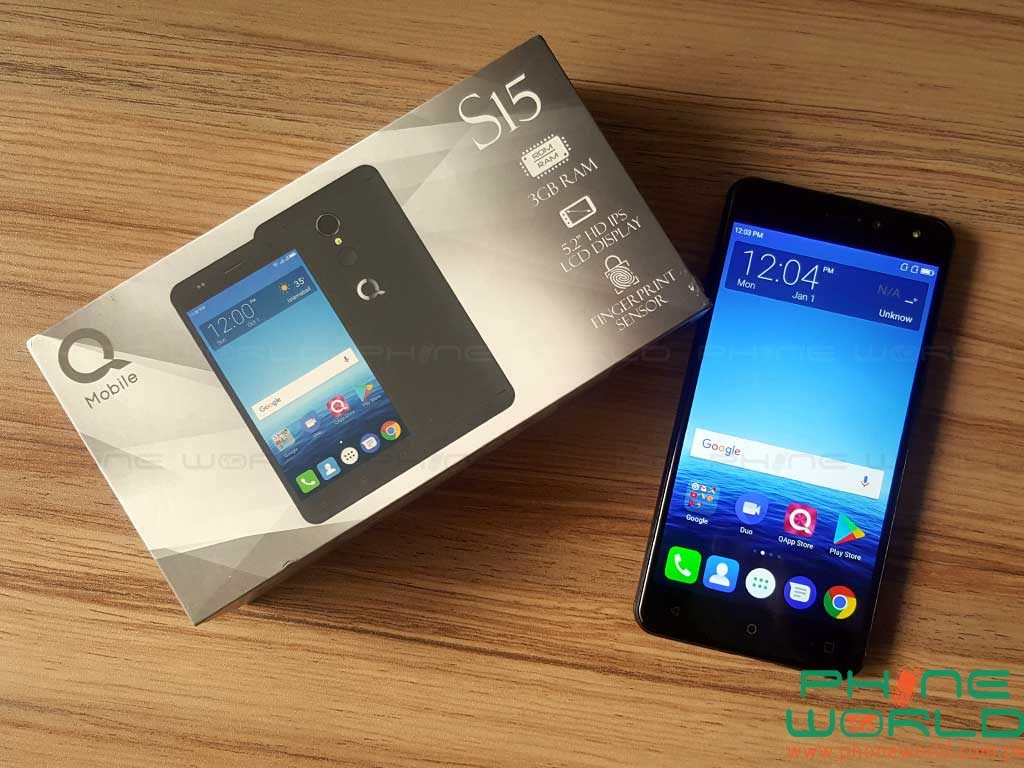 Price and Specifications of QMobile S15:

Display and Design of QMobile S15:

QMobile S15 comes with such an amazing and beautiful display with a supportive resolution of 720 x 1280 pixels. The device has an elegant screen of 5.2 inches with 73% screen-to-body ratio. The display of QMobile S15 has 320dpi pixel density for the visibility of icons and texts. The gadget supports graphics card of Mali-T720. We have tested it in 3D games and it has given us color accuracy Moreover we didn’t face any delay or lag. The brighter screen makes you feel delighted when you look at the screen. The brightness of the screen is well balanced. Multi-touch of QMobile S15 is average as it has scored 5 points in it after conducting a test.

Front of QMobile S15 has curved edges with 5.2 inches screen. On top of the front body, there are earpiece and front camera lens of 5MP with a flashlight. At the downside of the front body, three working function keys are present. The screen is surrounded by bezel layer.

On the top edge, there is a headphone jack. Volume keys and power buttons are available at the right edge. The USB port is placed at the bottom edge while on the left edge you will find sim jacket, in sim jacket, there are two separate Nano sim slots and one memory card slot.

The simple and classy back of QMobile S15 won’t allow you to ignore it. On the top of the back body, there is 8MP rear camera lens with LED flashlight. Below the camera, there is a fingerprint sensor. Logo of QMobile is boldly marked at the center.

QMobile S15 brings you a best rear camera with 8 MP lens. The LED flashlight increases the photo quality when you are taking the picture. The picture quality is very fine. Video recording quality is 720p. We have tested the rear camera image results, results we got are outstanding. Brightness and temperature are well balanced. Colors are very lively and eye catchy. We noticed the minimum noise when we zoom in the picture.

Front Shooter of QMobile S15 has 5 MP lens for selfie lovers. Keeping in mind the trend of selfie in Pakistan QMobile S15 comes with a high resolution of the front camera with flashlight. When you take the selfie with the front shooter, you will get the picture with the best quality. We have tested front shooter image results and we got extraordinary results. Colors are bright and very lively. When we zoom in the picture, we noticed the minimum noise. Brightness and temperature are well balanced. Shoots look more natural.

QMobile S15 gives you a sigh of relief if you stay out for a long time and unable to charge your phone again and again. The powerhouse of the device carries 3000mAh Li-ion battery, which allows you to enjoy 8 to 9 hours of talk time and 13 to 15 stand by hours of usage. That is no doubt a very big advantage and a good option for those who always get upset by charging their phones so frequently. The big battery of QMobile S15 is fixed.

QMobile S15 is powered by MT6737 Chipset, which is consisted of four CPU cores based on the 64-bit Cortex-A53 architecture clocked at up to 1.25 GHz. The gadget has a processor of 64-bit with 3GB RAM. Its network accuracy is improved because of its fast processor. It’s MediaTek chipset with its quad-core processor improve the battery timings.

When we conducted Antutu test in QMobile S15, it has scored 27873. The device has average multi-touch as it has scored 5 points in it.

After conducting vellamo benchmarking in QMobile S15 the result we got are satisfactory.

QMobile S15 comes with high features and specifications, which makes this device impressive. This device is mechanized with 4G and runs a version of Android 7.0 (Nougat) with 1.25 quad-core. Primary and secondary cameras have high resolution and very fine picture quality. Its good battery with long talk time and long standby hours of usage will force everyone to buy this outstanding gadget. Improved specifications and features make QMobile S15 remarkable and marvelous device.