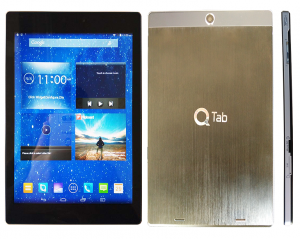 QMobile has launched another Tab named as QTab V10 with some extra features and upgrades with the Price tag of 13,500. This Tab has operating system of Android Kitkat version 4.4 that is supported with 1.3 GHz QuadCore Processor  and 1GB Ram and 8GB Rom. The device has the ability to upgrade to new versions of Android Operating Systems. Been built with 7.85 inches screen with XGA (1024 * 768) IPS LCD Screen, which shows the display in its actual and fascinating colors and enables it to show any type of video.

Having a nice wooden shape rough and stylish plastic back case with a nice logo of QTab at the back and two holes for the speakers at the lower edge for both speakers. The Tab is also 3G supported, the one that is needed for developing countries  like Pakistan.

Another thing is that it has been launched with 1.3 GHz CPU with model number MTK MT8382 its renderer is Mali-400 MP and with a Quad Core Processor which was Dual Core in the previous Tab of its Tribe.

The main memory with this Tab is 1 GB which is although enough for the device but QMobile has to work for more in the future as certain apps and games need much memory for smooth operation.

The internal storage in the Tab is 8 GB and if someone is interested in more storage, he/she can expand the memory to 32 GB.

Fitted with a battery that lasts long and works great while playing movies and surfing the net. The battery is 4700 mAh with great backup that encourages the users to feel free and easy at long trips and tours and save any event they want to keep record of and life lasting memories.

The internal interface looks cool and awesome just because of some features which makes it quite attractive and attractive because of its user friendly environment and wide screen that gives more choice to eyes for selecting the content he/she wants to see. Especially the ( change widget ) that has three options of Theme, Wallpaper and Effect that changes the Theme, the Wallpaper and the Effect, all in a single click showing that the environment has been so user friendly. The Tab V10 has a nice browser with multi-tab abilities and well equipped tools and options. The keyboard and the keypad have been used the standard ones with blue interface that looks cool.

The results with different benchmarks came out to be satisfactory as the Tab V10 does not contain any Octa-Core or high-fi processor and memory that may take it to the top three or at least the top ten but has been sent with 1.3 Quad-core processor with 1 GB of Ram. Different Bench Marks and their results have been given below:

All the results have been shown in the images. The only  thing that I want to mention here is that the Device has capacity up to 5 fingers all at the same time which is hardware supported feature.

Vellamo bench shows the overall performance of the device’s hardware as well as the ranking of the device with other smartphones and Tabs. Consult the results in the snaps.

You can see the overall performance of QTab V10 as well as compare it with other smartphones and Tabs and see the difference in a single glance.

GFX BenchMark is used to show the performance of the Graphics Accelerator or so called the Graphical Processing Unit GPU. The graphics card being used is ARM Mali-400 MP2 (Dual Core). The 3D API being used is Open GL ES 2.0. You can watch all these in the snapshots below.