Ministry of IT & Telecom and Pakistan Telecommunication Authority certainly deserves a round of applause for their extraordinary performance. Their biggest and most notable achievement during the past few years is the successful completion of NGMSA process under the current leadership that started in 2014. Through this extraordinary feat 1.98 billion dollars were directly earned in total for the Government but more importantly, it started a new era of broadband connectivity and digitalization in the country. The feat in itself is a great achievement as it became a reality after almost a decade (the auction was supposed to happen in 2005-2006 as per previous telecom policies of that era). Some naïve ICT leaders of that time take pride in saying that they managed to delay the auction without realizing that they stopped the country from moving forward…at the expense of tax payers’ money.

Raising the Bar for the mobile industry-Pakistan moving towards 5G

The first 3G/4G auction was conducted in April, 2014 and this May the 3G/4G auction was concluded.  In first NGMSA, 20 MHz spectrum in 1800 MHz, 30 MHz in 2100 MHz and 10 MHz spectrum in 850 MHz band were put up for auction. Zong, who was number 4 operator, came out very strongly taking 4G spectrum and ringing alarm bells for the competition. It certainly crossed a lot of mileage, taking technology leadership position by becoming the first adopter of 4G in Pakistan. In the same auction Mobilink secured 10 MHz, while Ufone and Telenor got 5 MHz each in 2100 MHz. whereas, Warid did not participate in the first auction.

3G/4G Auction not only earned 1.98 billion dollars for the Government but more importantly started, a new era of broadband connectivity and digitalization that previous leaders take pride in delaying

In 2015, second round of auction process took place in which Telenor secured 10 MHz in 850 MHz spectrum to start its 4G services (they are using half the spectrum for 3G & half for 4G). The recent auction was the last one in the NGMS auction series in which remaining 10 MHz spectrum was put up for auction. This time, against the popular belief that Ufone will go for the Spectrum; it was Jazz who made a bold move to get the Spectrum, making the Pakistan mobile broadband market even fiercer.

Although the 1800 MHz is technology neutral spectrum but it is mainly acquired for mobile broadband and as of today, the situation is that Jazz and Zong have the largest chunks available for Data Services; almost 3 times more than what Ufone has.  This clearly gives these two an advantage whereas; Telenor is just 5 MHz behind. For  better understanding of our readers we have provided a Spectrum chart although it does not take into account the small spectrum being re-farmed by Jazz (Warid in 1800 Mhz) and Ufone (in 900 Mhz).

Also, it is important to analyze the spectrum utilization. It can be seen that all the 3 big operators have almost exhausted their 3G spectrum in terms of customer density. When it comes to 4G, Zong probably shall be reaching its upper limit very soon whereas, Jazz may take some time probably 2 years before building enough appetite for additional spectrum. 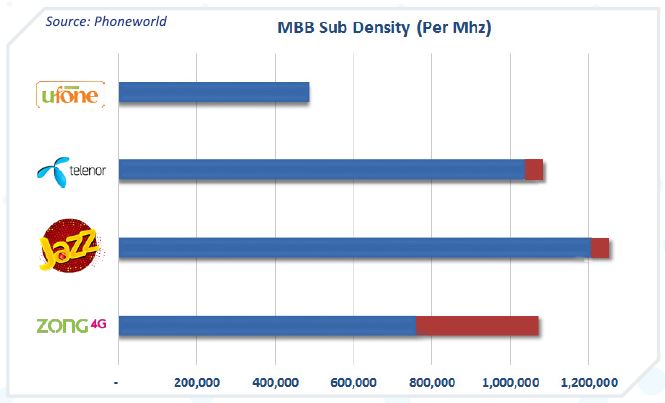 With big chunk of spectrum at hand, Jazz can now comfortably step in to the market of Internet of Things to establish itself as more than just a cellular service provider. According to IDC, global installed base of Internet of Things (IoT) will hit 28.1 billion devices in 2020, generating revenue of $1.7 trillion; and telecos will play a critical role in it.  Over the last few years, Jazz is making very strategic decisions; first with Warid merger, then it’s rebranding and now securing the significant 1800 MHz Spectrum.  With such strong decisions Jazz has made its intentions clear that it wants to further strengthen its leadership position in the Pakistani market. With largest subscriber base and biggest spectrum chunk, how Jazz will move forward will be an interesting feat to lookout for but one thing is assured, Jazz is the future of all Telecom and IT trends of our country.

Telenor 4G utilization is low but since its 850 Mhz spectrum is half used for 3G and the other half for 4G, it’s appetite for additional spectrum especially for 4G would be much quicker than Jazz. The only operator that has been left out from the current mobile broadband scenario is Ufone and we may see its eventual downfall if both shareholders do not resolve their dispute and give the company a breathing space for service and this should have been started  with more spectrum. Some time back, rumors about Zong’s acquisition of Ufone circulated the industry. Zong is a subsidiary of Chinese mobile and it is expected to play a major role in CPEC, a part of China’s One Road and Belt initiative. It is highly possible that negotiations have already taken place between both parties and Zong acquires Ufone in future as part of China Pakistan CPEC partnership. Many experts consider this possibility the only plausible reason for Ufone’s backing out of the auction since it could no longer afford to survive in the competitive mobile market of Pakistan with mere 5 MHz MBB spectrum.

Now that 5G doesn’t seems a distant reality, there definitely exists a possibility of an early 5G spectrum auction or even some other spectrum award mechanism for 5G

After the completion of NGSMA auction finale, now another round of auction might happen due to any of the following major reasons.

The next few years in Pakistan are going to be very interesting and eventful for the mobile Industry and we might see some of the above happenings. Overall, mostly the changes taking place are quite positive and will continue to develop in that direction, especially when  seen in the broader context of global market developments which are at its lowest.