We have been witnessing a couple of leaks and benchmarks showing the specifications of the upcoming device. A few days back, Razer Phone 2 With Snapdragon 845 & 512GB Internal Storage Popped Up On AnTuTu. It was further revealed that the phone will follow in the footsteps of the original by adopting a 16:9 panel. Recently, Razer sent “Save The Date” invites.  According to them, Razer Phone 2 Launch Date is set to be October 10.

We all know that Qualcomm’s Snapdragon 845 will indeed be powering the device with the help of the Adreno 630 GPU. In addition to that, the smartphone will be coupled with 8GB of RAM. It will have a whopping 512GB of internal storage. This is a huge upgrade over last year’s model which shipped with 64GB of storage. 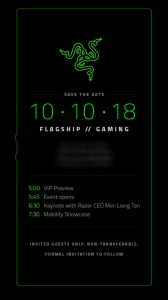 In addition to that, the handset will have Android 9 Pie pre-installed. We can expect the sequel to have the same 120Hz refresh rate for the display found in the original. That zippy rate will allow games and visual media to run very smoothly.

Razer was not able to implement the Chroma lighting system into the original Razer Phone due to hardware restrictions at that time. The Chroma lighting is an LED light technology that Razer incorporates into many products such as keyboards, gaming mice, laptops, and more. Chroma strip will activate whenever a notification comes through. It will replace the usual LED notification light. The good part is that the company is reportedly working with Texas Instruments in the hope of including it this year.

However, this is not confirmed. All we have to do is just wait and watch until it launches. Razor Phone 2 could go on sale starting from October 24. Let’s see what will be the price of the upcoming handset.