Realme 2 Pro was launched back in September 2018. It was the third phone by Oppo’s sub-brand Realme. Realme promised its users that it will update its smartphones within the first half of 2019. Now, the company is all set to fulfill its promise. Realme 2 Pro is expected to be the first handset by the company that is going to get Android Pie update.

Realme 2 Pro is the expensive smartphone by OPPO’s Sub-brand Realme till date. So, the company has decided to roll out the Android update to this phone first. Furthermore, the Phone has also been spotted at Geekbench running Android 9 Pie. Hence, the rollout seems imminent. Let’s have a look at the score sheet. 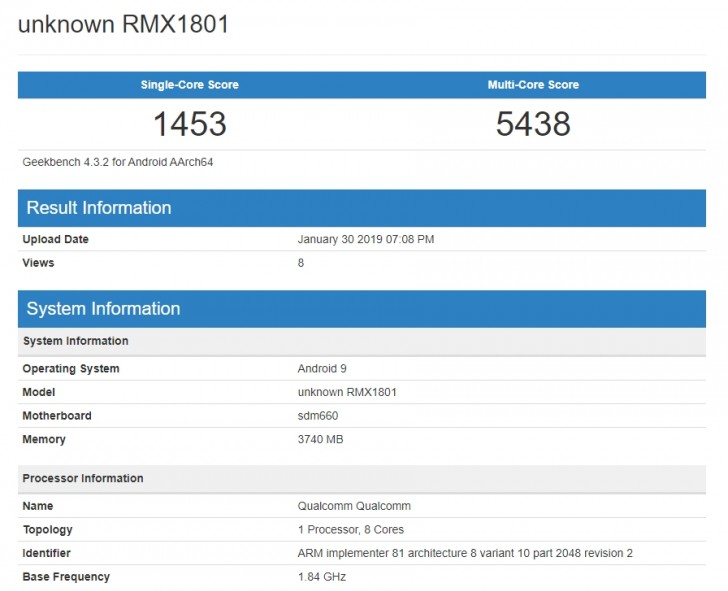 Coming to the specs, the handset features a 6.3” Full HD+ screen. Furthermore, it sports a waterdrop notch that is being called a Dewdrop by the company. The Realme 2 Pro features a Snapdragon 660 chipset with memory options up to 8/128 GB. The 2 Pro camera setup includes 16 MP + 2 MP cameras at the back. However, the primary sensor is positioned behind a fast f/1.7 lens. The selfie snapper, housed in the notch has 16 MP resolution and an f/2.0 lens. However, there is an oval fingerprint scanner and the Realme logo at the back. The handset doesn’t have the diamond pattern which was present in the Realme 1 and the Realme 2.

Furthermore, the phone comes with three RAM + storage options that are 4/64 GB, 6/64 GB, and 8/128 GB. The Realme 2 Pro is quite similar to the regular Realme 2. It runs ColorOS 5.2 based on Android 8.1 Oreo straight out of the box. However, the latest update will shift it to Pie. The phone has a massive 3500 mAh battery. The smartphone comes with some new interesting features like Easy Screenshot, Clone Phone, and Smart Play as well.