Realme 3 Pro recently got spotted at Geekbench and Bluetooth SIG. The listings revealed some of the key specs of the upcoming handset.

Realme 3 Pro Launch Date Is Set To Be April 22

According to the listings, the Realme 3 Pro will feature a 6.3-inch FHD+ display. It will also have a fingerprint scanner, Bluetooth 5.0, 5GHz Wi-Fi. In addition to that, the handset will come with a massive battery cell of 3,960 mAh. The latest reports have also hinted at the Color OS version 6.0, which indicates the phone will come with Android 9 Pie out of the box. 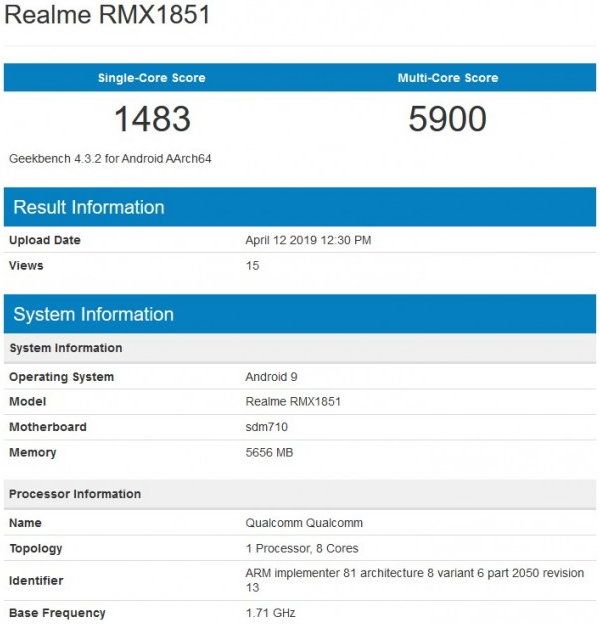 Moreover, Realme 3 Pro will boast a selfie camera somewhere above 12MP but below 25MP. However, there had been no words by the company yet. In addition to that, the main set up will have a dual camera. A 48MP snapper is also expected to be a part of the setup. The same device with model number “RMX1851” listed on Geekbench also appeared on Bluetooth SIG revealing more specifications.

The phone had also been teased to be capable of running the Fortnite Mobile game at 60 frames per second. According to the Geekbench listings, the upcoming handset will be powered by a Snapdragon 710 CPU paired with 6GB of RAM. The Realme 3 Pro Launch Date is set to be April 22. The handset will see the light at a press event at Delhi University in India. There had been no words on the price and global availability yet. Let’s see what comes next ahead of its launch.