On September 20, the company has announced that Realme C17 will make its global entry. The company has announced in an Instagram post that the smartphone is first taken to Bangladesh and has been revealed that the 90Hz refresh rate on the device is shown. The electronic launch will take place on September 20th at 12 pm (noon) and is broadcasting through Facebook and YouTube accounts on the company’s Facebook and YouTube channels.

This is the first release of Realme ‘Mid-level Premium Smartphone’ in Bangladesh, according to a swift translation of the Instagram post. an ‘ultra-smooth display’ with a 90Hz refresh rate will be featured with “strong performance, stylish layout,” is confirmed by the RealmeC17′. The smartphone was recently found on Geekbench and the list shows that Qualcomm Snapdragon 460 SoC is running the device.

Realme C17 Some Specifications are Here

Although the company has only shown it has a 90Hz screen, some resources revealed the expected smartphone specifications. The handset features a 6.5-inch hole-punch display with a maximum brightness of 90 percent display to body ratio and 600 nits according to pictures that the tipster tweets. 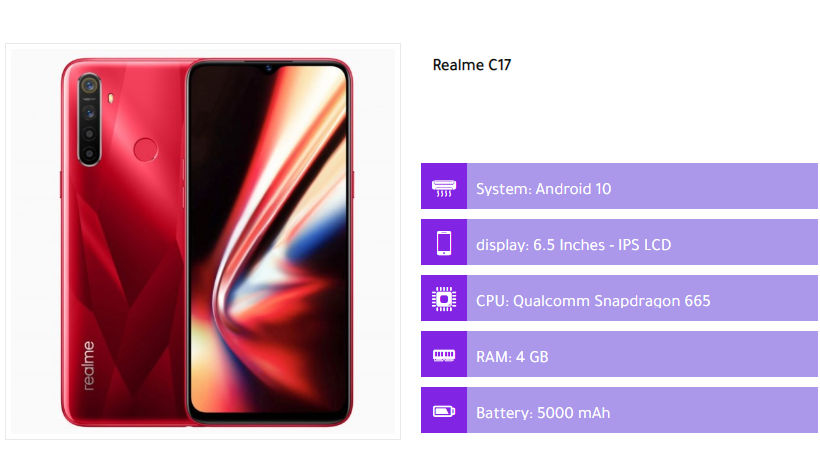 Under the hood, a Qualcomm Snapdragon 460 SoC is said to have been combined with Adreno 610 GPU.   The phone will have 4 GB of RAM and 64 GB of internal storage. Realme C17 will come with a massive battery of 6000 mAh.The phones are said to be sporting a quad rear camera setup featuring a 13-megapixel main camera, an 8 megapixel, a 119-degree ultra-wide screen, a 2-megapixel macro, and a black and white portrait sensor for two-megapixels for photography.

You may get your phone in the two color options Lake Green and Navy Blue. Battery details, charging system, fingerprint sensor etc. are not yet available. It’s expected price in Pakistan will be around 35,000 to 40,000 PKR.  Also device availability will be confirmed after the official announcement. So, we have to wait to know more about the mobile complete details.

You Maybe Interested in Rrealme: A Young Energetic & Tech Trendsetting Brand of Pakistan