A few days earlier, a mysterious Realme smartphone has appeared on FCC with the model code RMX3261. Now, the same model has listed on NBTC certification. We also did not know the name of the phone. But now we learn that it is the Realme C21Y.

Realme C21Y Will be An Affordable 4G Smartphone

The NBTC certification doesn’t divulge any specifications of the C21Y other than telling us it’s a 4G smartphone. However, the previous listing has confirmed that the smartphone will pack a notched display. There is a square-shaped camera island on the back housing three cameras. 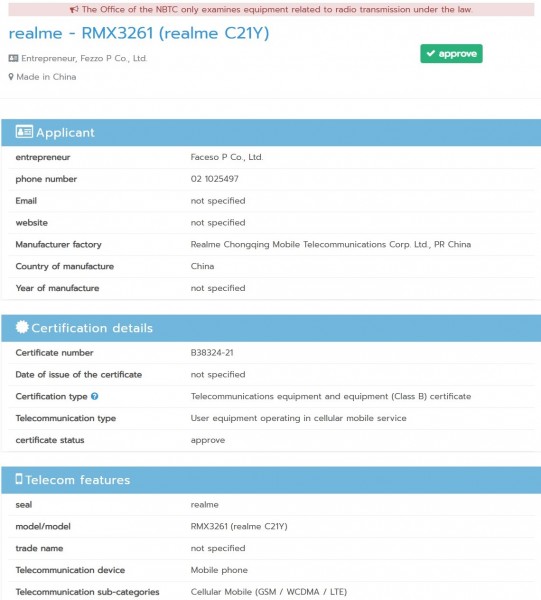 Moreover, the phone will also feature a fingerprint scanner for biometric authentication. There will also be a dedicated slot for a microSD card. Under the hood, the Realme C21Y will have a 4,880 mAh battery with 18W charging support. Additionally, it will run Android 11 out of the box, likely having Realme UI 2.0 on top.

The rest of the C21Y’s specs are still unknown. We will get more information about it in the coming days. Until then, stay tuned.

Realme is also working on another C-series smartphone, C25s. The phone has appeared in many leaks revealing the key specs and design of the phone.