Realme company is known for its authentic and affordable smartphones. The Chinese company emerges late in the market but has gained immense popularity and sales. As the company is launching Realme GT Neo3, its Le Mans version poster is shown to the public last week. The phone launch will take place on 22nd March 2022.

The CMO of the company, Xu Qi Chase showed off the look of the smartphone. It will be available in two colors; blue and white. Two stripes run the length of the Realme GT Neo3 Le Mans, along with the company’s logo and motto sandwiched between them at the bottom. This model is based on the racing stripes you see on sports vehicles, which are usually used to indicate performance and speed.

Those lines are also drawn on the Realme GT Neo3 Le Mans edition to indicate speed and performance. However, they are also a salute to the racers of the Le Mans race, particularly the 1966 event. 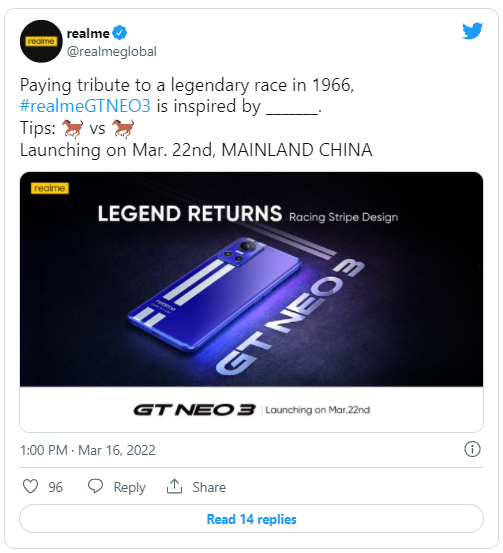 Aside from the paint job, the images supplied by Realme verify the GT Neo3’s inclusion of a 50MP main camera. There is a USB-C port on the lower side of the smartphone. It has a border of the speaker, mic, and SIM card slot. It’s expected to include a 3.5mm headphone port, as the GT Neo2 lacked one as well. The volume keys are on the left-side frame of the GT Neo3. Also, the power button is most likely on the right. There are no radio lines on the phone’s frame, so it’s safe to assume it’s not made of metal.

Realme hasn’t released the GT Neo3’s full specifications yet, but it has previously stated that it will use the Dimensity 8100 SoC and 150W charger. Mr. Chase did, however, hint at an 80W variation recently.

Also read: Galaxy Z Flip4 is Coming as Samsung has Ordered Display Panels for it